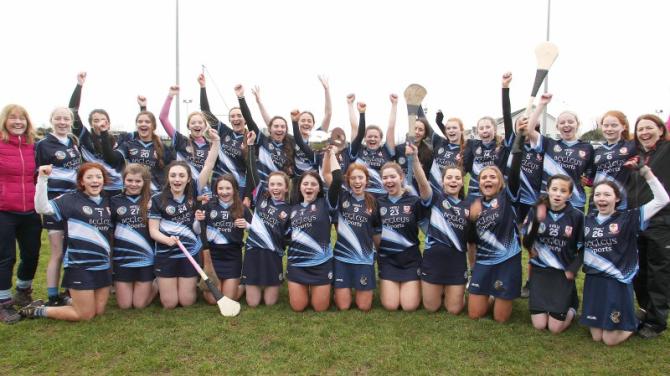 HAD someone suggested after the first quarter of this Fr Davies’ Cup final that St Patrick’s Academy Dungannon were going to win as easily as they eventually did, they would have been dismissed as mad.

However, there were signs even during the opening quarter that the Academy’s defence was not going to be easily breached. Emma Donnelly brought off a number of saves to deny St Killian’s in that early period of the game and the north Antrim side’s wides’ total rose as forwards in possession were put under pressure.

Yet St Killian’s were playing against the breeze and were dominating general play, albeit that they led by just a point from Niamh McKay. Then Reagan Fay delivered long from deep in her defence and Lára Devlin ran through to score a goal.

This pair went on to torture the Garron Tower side, Reagan delivering a Player of the Match performance in the middle of the park and Lára hitting five super points from open play during the second half.

That 15th minute goal from Devlin changed the dynamic of the game and two minutes later she set Rachel O’Neill up for a point. Fay scored an excellent solo point after 20 minutes and, while St Killian’s spurned chances to get back into the game, Fay’s mishit shot fell for her captain Sian Fitzgerald to race through for a second goal and an interval lead of 2-3 to 0-1.

The Tower were expected to up their game with the wind behind them, but instead the Academy camped in their half and got a fortunate goal after 37 minutes when Elisha Gervin’s kicked effort came off a defender to beat Mary Mooney in the St Killian’s nets.

That lifted the Academy and Lára Devlin picked off two points before the three quarter mark. Francine Farley added another as did Elishia Gervin before Devlin finished off with three super scores and only a point from sub Hannah McCann in reply.

There was some resistance from St Killian’s with Sine Woodhouse making runs up the wing, but the Tyrone side’s defence was always in control with Emma Donnelly so composed in goals and from shortly after half time there was little doubt that St Patrick’s Academy had managed to climb two grades in the space of just 12 months with an All-Ireland semi-final ahead of them in February and Senior A camogie next season.