Donnelly sets no timeline for return 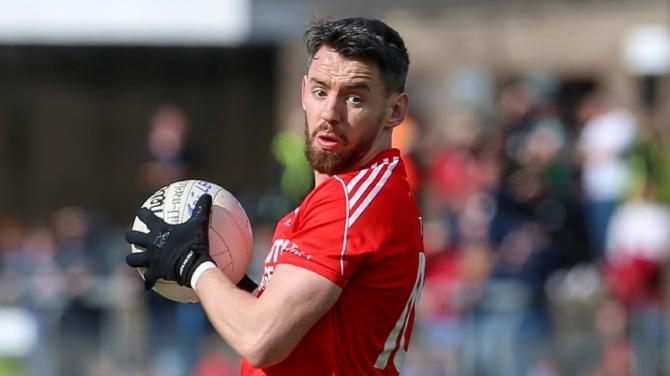 TYRONE captain Mattie Donnelly could miss the entire National Football League, and has expressed his fear that he may not be back in action in time for the big Ulster Senior Football Championship clash with Donegal next May.

Donnelly has insisted that he will not return until he is absolutely certain that he is ready, and fully recovered from a serious hamstring injury.

The former All-Star remains on crutches, and in a knee brace following surgery to re-attach a tendon.

And he revealed that recovery and rehabilitation time for this type of injury could be up to 13 months.

“Because this injury is so uncommon in gaelic players, it’s really hard to set a benchmark

“I have heard different, various returns of anything from five months to 13 months, so it’s all criteria-based, it’s all at the medical team’s judgement,” he said during the Bank of Ireland Dr McKenna Cup draw at Belfast’s Riddel Hall.

“I have to hit certain levels before I can return to play, so at this moment in time, I’m still in crutches and a brace, so I have to get that off, get the wound healed and then start trying to reach those levels. It’s impossible to tell when I’ll be hitting them.”

Against provincial champions Donegal at Ballybofey on May 17.

“That’s the date that’s standing out at the minute. That’s the one I’d love to be a part of or in the frame for.

“Obviously I’ll need to have a fair bit under my belt even to be in consideration to go into that level again.

“That is the ideal situation, barring no setbacks, but I’ll not be putting it in front of making the right return and coming back in the right place.

“It’s not the end of season you would have anticipated, but I’ll be eager to get back in the right time, not setting myself any timelines or any deadlines to be back.

“I’m just really focusing on getting back right, so whenever that is, that’s when it will be.”

The Red Hand skipper looks like sitting out the entire National Football League Division One campaign, but he feels a strong league showing is essential if Tyrone are to make a serious challenge in the summer of 2020.

“A strong league is always important. It gives you that bit of momentum going into championship.

“It also gives your team exposure to high quality games, they’re all extremely tough games against the best quality opposition in Ireland, so from a psychological point of view, it’s important that players and teams come out of the league feeling good about themselves.”

Donnelly was speaking at the official competition launch and draw for the 2020 Bank of Ireland Dr McKenna Cup at Riddel Hall, Belfast.

Players and officials from each of the competing nine counties attended the draw along with a large media presence.

The draw was conducted by Ulster GAA President Oliver Galligan and Terry McCrudden, on behalf of competition sponsors Bank of Ireland.

Oliver Galligan, Ulster GAA President commented: “The Bank of Ireland Dr McKenna Cup gives our county teams the opportunity to get back to much needed competitive action ahead of the National League.

‘‘Our supporters also enjoy getting back out to follow their teams after the inter-county off-season. Over 45,000 supporters attended our games last December and January and we expect another series of exciting matches in the 2020 competition.”

Terry McCrudden, Regional Manager, Bank of Ireland added: “We’re delighted to sponsor the Bank of Ireland Dr McKenna Cup for another year and see our partnership continue to go from strength to strength.”

The draw was as follows:

Section B: Antrim, Down, Fermanagh