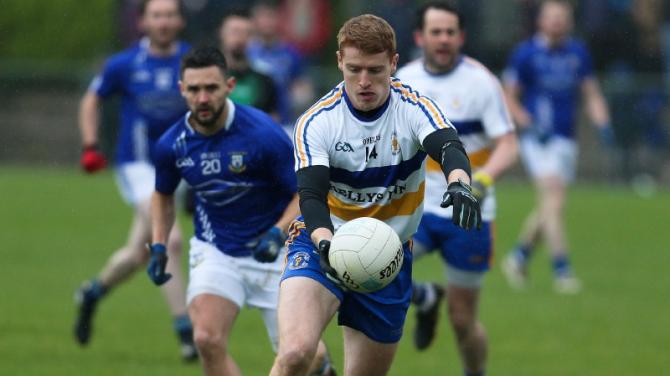 DROMORE won the Tyrone Division One league title with a four points victory over reigning champions in a thrilling final at Fintona.

The St Dympna’s staged a strong second half performance to come from behind and lift the Brendan Donal Trophy and complete their season on a high.

It was Errigal who led by two points at the interval, but in front of a big crowd, the men from Gardrum Park dug deep, and a goal from Ryan McCusker proved to be the vital score as they finished strongly to win by four.

For Errigal, it was a time to reflect on what might have been, a season when they came so close, reaching the deciders in both league and championship, but coming away with nothing.

It was a competitive and uncompromising encounter, but it ended in unsavoury fashion, when a melee led to a rash of red cards – five in all.

Straight red cards were shown to Errigal Ciaran’s Niall Kelly and Eoin Kelly, as well as Dromore pair Sean McNabb and Paul McHugh. And Errigal finished with 12 men after Ben McDonnell picked up a second yellow.

“An otherwise sporting game was interrupted by a brief but unacceptable sequence of events in the closing stages,” said Tyrone PRO Eugene McConnell.

“The Tyrone Competitions Control Committee will await the report of the referee and a full investigation will be carried out.”

The Dunmoyle side started strongly, and shaded the opening exchanges, with skipper Peter Harte swinging over a brilliant score off his weaker right foot early on.

Davy Harte was also on target against a Dromore side that was slow to settle, but Sean McNabb settled their big match nerves with a well taken score.

A superb Niall Sludden effort brought the sides level in the 20th minute, but shortly afterwards, Peter Harte was fouled going through, and a penalty was awarded, which the Tyrone star took himself, slotting confidently to the bottom corner of the net past Damian McGale.

The St Dympna’s rallied for Cahir Goodwin and team captain Eoin McCusker to fire over points, but late on, Mark Kavanagh stepped inside his marker on the right wing to split the posts for a fine score, sending the defending league champions in with a 1-4 to 0-5 advantage at the break.

But Dromore, with Sludden, Ciaran McCoy, Sean McNabb and McCusker all increasingly influential, stepped up the tempo in the second half.

Emmet McNabb steered over a point, and McCusker brought the sides level, before they crafted a well worked move which was finished the net by Ryan McCusker for a crucial goal.

Errigal had to find a response, and they did in the form of an Eoin Kelly score, to leave just a point between the sides, but Dromore displayed grit and determination as they pushed on for another volley of points.

Sludden landed a spectacular effort, and McCusker converted a free, and they held out superbly against a wave of Errigal attacks, with Ronan McNabb’s late point clinching the title for them.