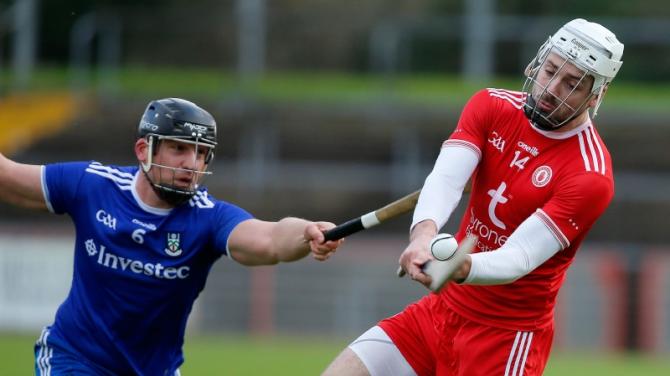 EOGHAN Ruadh Hurling Club stands on the cusp of history as it prepares to compete in its first ever Ulster Club Intermediate Hurling Championship final.

The Dungannon men take on Naomh Eanna of Antrim in Saturday’s decider at Owenbeg, ready to reach out for unprecedented success.

It promises to be an occasion like no other for supporters and players alike, who will share in the build-up and savour the atmosphere of provincial final day.

The Tyrone champions will come up against a formidable opponent in an accomplished Antrim side, but they will show no fear of records or reputations when they take the field this weekend.

They have already defied the odds by seeing off Keady in the semi-final, and they have the skill-set, the drive and the self-belief to lay on another mighty performance.

“It’s been a great buzz since we won the county final. Every night at training, every man is up for it, everybody willing to do their part,” said team captain Conor McNally.

“It’s the biggest panel we have ever had, maybe fifteen men on the bench, and those boys have been giving it everything in training,” said McNally.

“There’s great character in the squad, and the togetherness that they’re showing is brilliant.”

McNally, who was man of the match in the semi-final win over Keady, believes the team’s participation in the Antrim League this season has played a major role in developing character and competitiveness.

“We set out at the start of the year playing in Division Two of the Antrim League, to get a foot in there.

“We were playing against serious opposition, and it’s the experience in games like that that have got us over the line. It’s getting better every day for Dungannon.

“We have played St Enda’s twice this year, and they have got over the line twice.

“It’s all on the day, and hopefully we can put in a massive performance, just we did in the semi-final.”

And with Antrim man Colm McGuinness in charge, the team captain believes there is much more potential in the Eoghan Ruadh men.

“The man is unbelievable, and this year has been extra special. We’re indebted to him.”

The success of the senior team owes much to the work being done at under-age level within the club.

“The coaching in the club is unreal, right from U6 the whole way through to senior.

“This year we have five or six minors in the senor squad, and next year it will be closer to ten, twelve. We’re going from strength to strength every year. We have put in a lot of hard work.

“The club is going from strength, with the new clubhouse and the youth coming up, and he was saying it was great to be part of this club.”

Damian Casey has been the chief score-getter throughout the season, but there are others who can hit the target as well, such as Matthew Mulgrew, Kiefer Morgan and Tiernan Morgan.

Eoghan Ruadh are brave and defiant at the back as well, with Conor McNally, Mark Winters and Stephen Donnelly redy to stand firm against the Belfast men.

Casey is also a strong advocate of the youth policy at the club, which is now paying dividends and continues to develop exciting new players for the senior side.

“Our minors only lost by four points to Loughgiel in the Ulster Minor final, and we can learn from them. Whatever two or three mistakes our minors made in that final, we will hopefully not make those.”

While Antrim hurling is played at a higher level than the game in Tyrone, Casey believes Dungannon can continue to build and make a big statement this weekend.

“In the grand scheme of things, Tyrone is not a hurling stronghold in Ulster. Down and Antrim are on the other side of the draw, and they have a much richer history.

“But that will do us no harm, going in as underdogs with nothing to lose. We’ll put the head down and we’ll prepare for it and give it a run.”

After defeating Lisbellaw in the first round of the Ulster IHC, they took on Keady in the semi-final, and a heroic second half display, playing into the wind, carried them through a thrilling contest.

“We were playing with the wind in the first half, I don’t know whether it was nerves, but it wasn’t a great start, and they went three up.

“But once we got into our stride, we had two or three goal chances in the first half. We only got one of them, and it could have come back to haunt us, but we went in four points up at half-time.

“Any time they got a score, we got one back, and that’s all it was about, game management.  We knew when we got the ball up into that breeze in the second half, we needed to get scores, and thankfully we did that, and jus did enough to get over the line.

“Many’s a day we could have folded under that, into the breeze, with Keady coming at us.”