Moortown ladies save the best for last 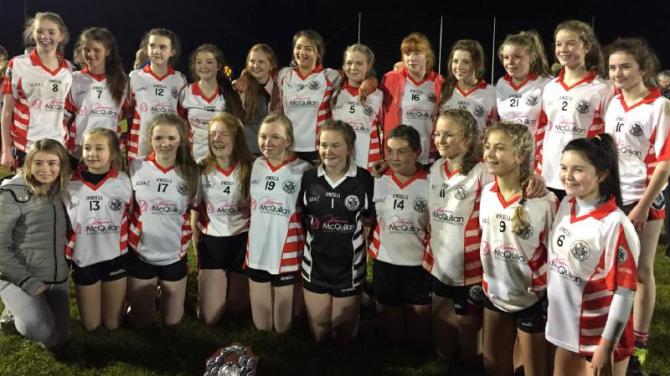 IN THEIR final ladies match of the year, this group of players certainly saved the best till last. The sides have met on two previous occasions with each being victorious once, Moortown in the first league outing and Cappagh had then got their revenge in the championship semi final just 2 weeks ago.

Cappagh were the first to settle and following a few minutes pressure they got the game's first score, with a well taken point. The Moortown girls got back into the game following a determined run from Caoileann Quinn, beating 2 Cappagh players before planting an unstopable shot past the goalkeeper for a lead that Moortown weren't to surrender.

A Sarah Devlin point soon followed as Moortown took the initiative. The same player pointed again soon after following a brilliant Moortown move which started in the half back line.

Not to be outdone, Cappagh replied with a goal to leave only a point between the teams again. Moortown were showing a real determination not to be beaten and following a turnover around midfield, they worked the ball forward to Donica Ryan who calmly shot into the net.

Another point from a Sarah Devlin free further increased the lead. All credit to Cappagh though as the finished the half very strongly, scoring 1-2 without reply to leave the HT score Moortown 2-3 Cappagh 2-3.

The second half was to be even better. Moortown took the game by the scuff of the neck for 20 minutes, dominating the play with Emily Conlon, Katie McNally and Saoirse Quinn keeping the dangerous Cappagh half forward line out of the game. Points from Emma Murphy and Sarah Devlin were followed by a foul on Devlin after a fantastic run at the Cappagh defence, resulting in a penalty.

This was then well saved by the Cappagh keeper to keep the Moortown lead to 2 points. Continuing their period of superiority, further points followed from the excellent Caoileann Quinn and 2 more from the outstanding Devlin.

Moortown had further chances to put the game to bed but were guilty of some bad misses, kicking several wides and then short into the keepers hands on 3 occasions. Then suddenly the game changed, Cappagh kicked five unanswered points to leave the game looking certain to go to extra time.

Under immense pressure, Moortown goalkeeper Mia Crozier found a red and white jersey from the next kickout and a move involving Brianna Vincent and Rachel Tallon worked Sarah Devlin into a scorable position.

Cappagh could only foul leaving Sarah Devlin to kick her 7th point of the match from the resulting free. The final whistle went seconds later and the Moortown girls and management could celebrate a famous victory. Kevin McCrystal (Tyrone LGFA) presented the shield to Caitlin O'Neill and Karen McKenna.