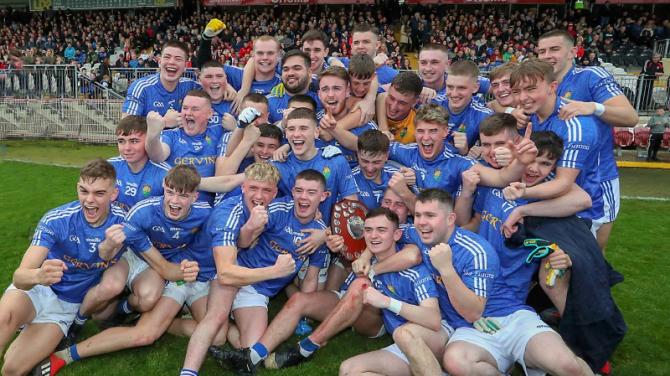 COALISLAND were crowned Tyrone U21 Grade 2 champions at Healy Park, where they grabbed goals at important stages of a high quality and fiercely competitive final.

Fintan Coney and Eoghan Rankin found the net as the Fianna denied the Tir na nOgs a third successive title at this level.

There was just a point in it at the break, but a talented Coalisland side stepped up the tempo after the restart to claim the prize.

One of the goals came with a large slice of good fortune, and Moy were left to reflect on how close they could have got at the finish had they managed to avoid that second half setback.

Eoghan Rankin’s early point was cancelled out by Conroy, who drove a 48 metre free between the posts, and the Moy went in front in the fifth minute when the same player tapped over a 20 metre free.

As play swept from end to end, Tiarnan Quinn arrowed over a fine score, before the Tir na nOgs swept back downfield for Conroy to dart past his marker and squeeze over his third point from a tight angle.

The scores were coming thick and fast, and they were level again by the eighth minute as Eoghan Rankin judged his angle perfectly to equalise again.

But in the 12th minute, Moy got in for a goal, and it was that man Conroy again, fetching at the far post from Francie Kelly’s dropping delivery to turn and net from close range.

That sparked the Fianna into action, and they seized control, with Bailey Leonard, Jack Fee, Niall Devlin and Caoimhin Murphy all getting heavily involved.

They shot 1-3 without replay between the 15th and 23rd minutes, and also missed the target on a number of occasions from scoreable positions.

Quinn won a free that he converted himself, Fintan Coney drilled over a point when he perhaps could have gone for goal. And Leonard split the posts from a placed ball to level the scores.

Eight minutes before the break they went back in front with a Coney goal, finished low to the net from Murphy’s cross from the right wing.

Just as their opponents had done, the Moy responded strongly to the setback, hitting three points to go level again.

Diarmuid McKeown, now pushed up into attack, was on target, as was Shane Mackle, with Jamie Coleman sending over a fine long range score.

But in stoppage time, a Quinn free regained the lead for the men from Fr Peter Campbell Park, who went in at the break with a 1-7 to 1-6 advantage.

Conroy landed another fine score to level for a fifth time, but once again, Coalisland, with a slight wind in their backs, began to assert themselves on the contest, putting the Moy defence under sustained pressure.

Coney had a goal chance, but fired his shot just widne, and another goal-bound effort from Philip Gervin as blocked, and they continued to press, but again the finishing was wayward.

Such was their dominance in the third quarter, that the scores were bound to come, and when Rankin and Quinn sent over stylish points, they led by two.

And they effectively sealed the deal in the 47th minute with a fortuitous goal, Rankin’s dropping delivery from 40 metres deceiving last defender and goalkeeper to go straight to the net.

Now they led by five, and the Moy had a mountain to climb. But they battled bravely to get back into it, with Conroy converting two difficult frees and Francie Kelly also on target, after picking up a breaking ball from Conroy’s delviery.

The Fianna manged just two points in that final quarter, through Coney and Leonard, but they held on to deny the Moy a third successive title.