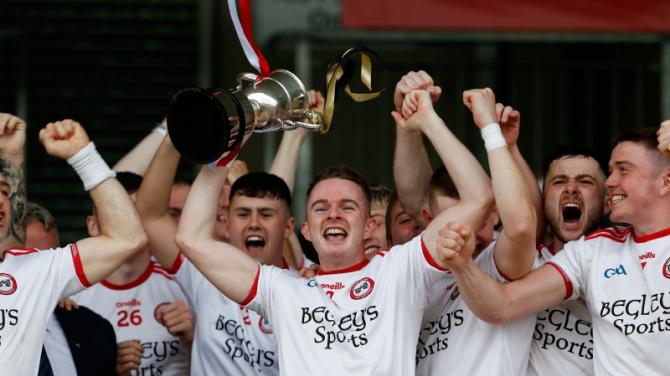 Just two points separated the sides at the finish, with Damian Casey’s 11 points proving so precious, along with Branan Molloy’s opportunist goal.

“It’s always good to win a county final, we got it back last year after losing three on the trot,” said Dungannon’s Tiernan Morgan.

“It was a tight game and it’s always close between us and Carrickmore.

“We started well but slacked off a bit, there were nerves, but when we got the goal it settled us.”

Liam Armstrong  was on target early on for the Eire Ogs, with Kiefer Morgan responding, and the holders had further scores from Damian Casey and Tiernan Morgan as they built up a 0-6 to 0-2 lead by the end of the opening quarter.

But they had to defend with real courage against a Carrickmore side that attacked with fervour, with Dermot Begley on target for them.

Justin Kelly weighed in with a couple of fine scores, but Eire Og still trailed by four as half-time approached.

Carrickmore goalkeeper, Conor McElhatton produced a brilliant save from Kiefer Morgan and from the counter-attack Carrickmore grabbed a goal, with John Devlin saving from Ryan Butler, only for Bryan McGurk to net from the rebound and leave just a point between the sides.

However, Casey continued to hit the target, and helped his side to a 0-13 to 1-8 interval lead.

Carrickmore stepped up the intensity on the restart, firing over points through Kelly and Dermot Begley.

Eoghan Ruadh rallied again, with Tiernan Morgan hitting a couple of scores and Casey adding two more to his tally.

And they struck a major blow when Molloy scrambled home a goal to give the champions a six points advantage.

Carrickmore found a brilliant response when Dermot Begley smashed a free to the net, and he traded points with Casey as the game reached a crescendo in the closing stages.

But Eohgan Ruadh held on to retain the title with just two points to spare.