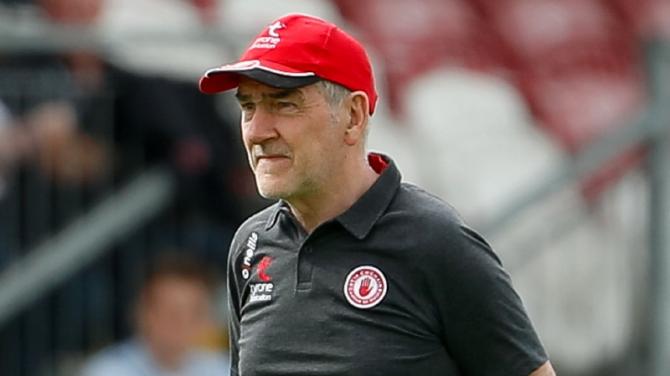 TYRONE have never before appeared in two successive All-Ireland finals, but they can make a historic breakthrough this weekend at Croke Park.

Victory over Kerry in Sunday’s semi-final will send the Red Hands into another Sam Maguire Cup decider, and possibly set up a repeat of the 2018 clash with Dublin.

Last weekend’s Super 8s clash with the Dubs turned out to be a bout of shadow boxing, with both sides significantly understrength, having already secured their places in the semi-finals.

Just like last season, Tyrone have taken the circuitous route to the penultimate stage of the All-Ireland Championship.

After losing out to Donegal in the Ulster Championship semi-final, they were forced into the Qualifiers, but once again displayed resilience as they built momentum with victories over Longford, Kildare and Cavan.

Then it was on to the Super 8s, and the Red Hands continued to impress as they carved out wins over Roscommon at Hyde Park and Cork at Croke Park to secure their place in the All-Ireland semi-finals with a game to spare, and creating a piece of history in the process, as the first Tyrone team to qualify for three successive semi-finals.

Last weekend’s concluding quarter-final round robin game against the Dubs at Healy Park was a dead rubber, as both had already booked their place in the last four,

But the tempo will rise significantly this weekend when old foes Kerry and Tyrone do battle at Healy Park.

“Kerry are still the top team in the country as far as the Sam Maguire is concerned,” said Tyrone manager Mickey Harte.

“They always have their eye on that and people always expect them to be big contenders for that and they seldom let people down.

Kerry scored a comfortable victory on the last occasion the teams met, a National League tie in Killarney at the start of the year, but Harte insisted that will have no bearing on this weekend’s encounter.

“That was January and this is August and that was in Killarney and this is in Croke Park so everything is different.

“Every day we go out is a different day and teams have certain ways of playing and every team develops during a season and I hope we have developed as well. I wouldn’t really pay too much attention to that performance or outcome.

“It’s all about one game next Sunday in Croke Park and there is some prize at the end of it.”

The Tyrone boss said he went into last Sunday’s clash with the Dubs with no preference in terms of semi-final opponents, whether it be Kerry or Mayo.

“We didn't know who it was going to be. We went into this game knowing that we had two options depending on our result.

“And we had no preference. Our preference was to top the group and we didn't do that, so that's disappointing. I think it's disappointing that the scoreline, when you read it in days to come, it will look like we were well and truly beaten and that's not the case.”

Harte is uncomfortable with the quick turnaround, with just a week between the final game in the Super 8s and the All-Ireland semi-finals.

“Well, it's the big picture again, we can all fix something in one competition or for one set of teams but to fix it for everything, football and hurling, I understand all the difficulties in getting it perfectly right.

“But it seems a bit quick of a turnaround from your last qualifier, Super 8, quarter-final, call it what you will, to have to go out within six or seven days again. It does seem like something better can be done there but I would hope people would be reflecting on that and trying to do something about it.

“I've always been a fan of not having the old style quarter-finals where provincial champions could fall on their sword in one day. I never thought that to be fair.

Continued from Back Page

“I had various permutations to make it different but nobody ever listened to me, so the Super 8s is the thing that came up here and I'm happier with that because you get a chance to be beaten and still stay in the competition.

“So I'm all for that opportunity but I think there could be better ways of making it happen,” je said.

Battle-hardened by many weeks on the road in high intensity competitive action, the Red Hands are as ready as they’ll ever be for what promises to be one of the games of the season.

Harte is delighted to have made it to another semi-final, at the end of a long, hard road that has had many turns.

“It is not easy to get to semi-finals and I have been blessed to be in a number of them and we appreciate that because there is no guarantee we will get to another one again.

“It is always hard work in a semi-final. A beaten semi-finalist is nowhere and the winner is part of the biggest GAA day in the world.

“We were close a few of those times and a few decisions here and there did not help our situation. It is good to have made that breakthrough after not making it. It gives a confidence to the players.

“Getting to an All-Ireland final is good in two ways for players in that they know what that is like now and they would know how good it would be to get back there so it should give them an extra desire to get back there again and if they got  there again they should be more experienced in dealing with that situation.

“It is a nice place to be but its only real value to you if you go on and get to the final again. A final experience is not much good if you don’t get back for a long time.

“That is the big challenge that is in front of us. It is something that is very good to get to and it will be good for our players if they get there but Kerry are no strangers to that position either and they have players with lots of experience of semi-finals and finals too.”

Harte admitted it was difficult to focus on the semi-final as soon as they had qualified for the last four with a Super 8s victory over Cork,  because they still had a game to play against the Dubs.

“And obviously you don’t play Dublin and not think about them either.

“We needed to rest players that had been on the road for five weeks. The Dublin game demanded certain things and we had to attend to those things. It was not that we did not think about Dublin, f course we did. We did not know until after the game on Sunday.