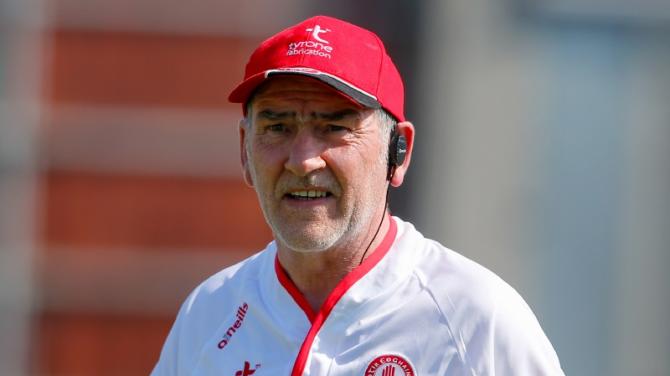 TYRONE have a two-week break from a hectic schedule before they take on All-Ireland champions Dublin in the last of their Super 8s round robin games.

It will provide a welcome opportunity to recharge the batteries for a group of players who have been in action on five successive weekends as they made their way through the Qualifiers and All-Ireland quarter-final ties.

The clash with the Dubs at Healy Park is a dead rubber, as both sides have qualified for the semi-finals, but it will nevertheless create a buzz and attract a huge crowd to the Omagh venue.

Tyrone manager Mickey Harte will be relieved to get a weekend off, as he believes fatigue may have played a part in his side’s disappointing first half performance against Cork, when they fell seven points behind.

“We are five weeks on the road now and maybe people are a wee bit fatigued at this stage, that could be part of the reason,” said Harte.

“Other times you just don’t have an explanation for these things, you never anticipate that you are going to concede a goal so early number one, and secondly to concede another goal midway through the half.”

“That’s never in the script when you go out to play anybody so it is a shock to the system so it happens, but the good thing is these players were able to deal with it and bounce back with something very positive.”

He insisted, however, that his players are enjoying the journey, and are looking forward to getting back to action as they chase a first All-Ireland title in eleven years.

“They are enjoying playing the game. We wouldn't be training them very hard at this stage but five weeks on the road is a right slog for amateur players and trying to get themselves recovered in a few days and prepared in another few.

“I don't think the atmosphere is too sore on the people. When you get to Croke Park I think it creates an atmosphere of its own. Being on this pitch, at this level, when there is 60,000 in and making plenty of noise it is wonderful but I think even the crowd there can make plenty of noise if things are going well for them.”

And the manager will not be pushing his players hard in training this week or next.

Harte paid tribute to the part played by skipper Mattie Donnelly at Croke Park, as he moved from a deep-lying role to the front line of attack and inspired his side’s comeback.

“We would like to play him everywhere. The same with Petey Harte we would play him in 10 different places but you have to decide in any one day where the best place is to play him.

James Loughrey’s first goal for Cork brought a personal high-point at Croke Park, but he would gladly have given it back in favour of a win over Tyrone.

It was an unlikely strike from a defender who had been dropped for the Super 8s tie against the Red Hands, but found himself in the right place at the right time after coming on as a sub for the injured Tomas Clancy after just 10 minutes, and beat one of the best goalkeepers in the business, Niall Morgan, with a 15-yard screamer.

“I’d need to look at it again, because I don’t know how, from 15 yards, it got past a top ’keeper like Morgan,” he said.

“The defender didn’t go to me at all, he stayed with Hurley, who is obviously the danger man, and let me have a shot.

The former Antrim player was withdrawn from the starting line-up just before throw-in, his place in the Cork defence going to Stephen Cronin, and Loughrey confirmed that there was no injury issue, and that his demotion was purely a selection issue.

“I just played atrocious against Dublin and got deservedly dropped,” the Mallow clubman admitted candidly.

“I didn’t think I would get on after 10 minutes, but I had to get my head right.

“I was obviously very disappointed, but I had to keep my head right and get tuned in. When I came on I didn’t think I would get the ball 15 yards from goal and nail one.”

Leading by five points at the break after running the Red Hands ragged in a first half which saw them grab two goals, the first from Luke Connolly, the Rebels were in dreamland, but in the end, a five points interval lead was never going to be enough against a Tyrone team that flicked a switch and produced an awesome second half display.

“We had a really hot period in the middle of the first half, but we didn’t capitalise enough, and only going in at half-time leading 10-5 wasn’t enough, to be honest,” said Loughrey.

“We thought at the time it was, we were going well. We really targeted the third period, and Tyrone just flipped it on its head, and did it to us. We’re hugely disappointed.

“They had Mattie Donnelly inside, and he wouldn’t really be known as an inside forward, and he caused us a lot of bother.

“He’s a top quality player and he’s going to do that, but usually you see him in midfield or in the half forward line, getting on ball and running at you.

“But he just did something different, and he probably was the difference in the game, to be honest.”

Last year’s beaten All-Ireland finalists march on, but Cork, despite two defeats in two Super 8s outings, have many positives to reflect upon.

“Tyrone are Tyrone. That’s their fifth game in a row and they’re unbelievably fit, unbelievably conditioned, and they know exactly what they’re doing.

“It will be interesting to see how they go in the next step against Dublin. Obviously it hasn’t worked out for them in the last couple of years, and they tried something different against Donegal.

“Maybe they’ll hold their hand against Dublin, as they’re already through.”