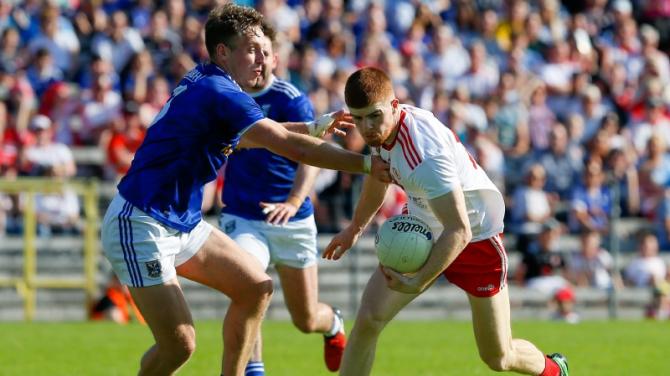 RAMPANT, ruthless Tyrone handed out a heavy beating to an outclassed Cavan side to book their place in the All-Ireland Super 8s.

The Red Hands were dominant in every department as they took their opponents apart in a merciless demolition job, and were in no way flattered by the 16 points winning margin.

The beaten Ulster finalists never got going against a fast and efficient opponent that never looked like losing this Round 4 Qualifier tie.

The result means Tyrone’s hectic schedule will continue, with games every weekend right to the conclusion of the round robin All-Ireland quarter-final series, which begins on Saturday with a trip to Hyde Park to take on Connacht champions Roscommon.

“We never saw the game panning out that way, to be quite honest. We thought it was going to be going neck and neck to the last minute,” said Kieran McGeary.

“They were Ulster finalists and we weren’t. that’s the only way we had to look at it. we’ve had many’s a battle with them in the past.

“There’s been similar score-lines, and there’s also been very tight games, and today we honestly thought it was going to be a really tight game.

“So we prepared well, and I think and hope that our preparation was the deciding factor there.”

The Pomeroy man is confident that Tyrone will continue to grow stronger as the All-Ireland series progresses.

“We’re on the road again from that Donegal defeat, and we can only keep getting better.”

After an evenly balanced opening, Tyrone caught fire and blew their opponents away with hard running and clinical finishing.

“There was a few times in the first 15 minutes that if you really wanted to call it, you maybe couldn’t have.

“Then the game opened up in our favour, we got a few scores before the half, sitting in a nice comfortable position at half-time.

“We re-addressed at half-time and decided to push on and see what we could do in the second half.”

McGeary expects a tough challenge from Roscommon this weekend.

“We went there in the League this year and you know how lucky we were to get out of there with a draw. We could have easily have been beaten.

“They’re provincial winners, sitting on a high, and we have had to go through the back door, so bookies will rightly favour Roscommon, and rightly so.

“They’re a great team, they’re a fantastic county, they’ll have loads of support, and they’ll be buzzing, they’ll be waiting for us.”

And the Red Hands may have to go there without key player Peter Harte, whose third black card of the Championship means a suspension, which he intends to appeal.

“I didn’t get a good look at that out there today, but I know that the last two have been soft,” said McGeary.

“Barry is an amazing referee, he always does an excellent job. But it’s a card that’s extremely inconsistent at times. If we are missing Petey, it is what it is. We know his importance, everybody knows his importance to us, but we’ll just have to adapt and see where it takes us.”

The Red Hands are in the same Super 8s group as Dublin, Roscommon and Cork, with the Dubs widely expected to finish on top and breeze into the All-Ireland semi-finals.

“Let people assume that. It’s only right that they do think that. They are All-Ireland champions, they are the team that they are.

“We will be targeting every single game the exact same way, down in Roscommon, we’ll be going to Croke Park against Cork and then we invite Dublin to Healy Park.

And McGeary is relishing another crack at the All-Ireland champions when they visit Healy Park for the final game in the series.

“We got over them this year in the National League, which was nice, down in their part of the world.

“It doesn’t really matter where you get them, to be honest, but we will target Roscommon first, we will face Cork second, and then we will worry about the Dublin game, when that comes.”

It’s been a hectic schedule for Tyrone since they entered the Qualifiers, playing every weekend, and that’s set to continue through the Super 8s series.

“It’s taxing, but it’s enjoyable. Training has to be filtered differently, obviously to suit injuries, to suit recovery, and that’s grand.

“We’re doing it, we’re coping, but isn’t that why you have a panel, so that you’re able to give boys opportunities, so that anybody can come on on any given day and do any given role. So we’ll be ready. Let the games begin.”

The strength of the bench was once again demonstrated at Clones, and McGeary expects subs to continue to play major roles.

And McGeary admitted that defeat to Donegal in the Ulster SFC semi-final continues to hurt, despite the recovery Tyrone have made since then.

“We took the Donegal defeat extremely bad. It still sits within us, we’re still swallowing that lump.

“They are where they are, for very good reasons, but it was a massive learning curve for us.

“I wouldn’t say that we were sitting extremely cocky going in against them, not one bit, but they nipped us on the day, and we will take it as it comes.

“You never know, we could end up meeting them again, who knows?”

In front of a crowd of 11,258, Niall Murray’s early free was cancelled out by a point from Tyrone’s rookie midfielder Brian Kennedy, and they hit the front when goalkeeper Niall Morgan drilled a 58 metre free between the posts in the tenth minute.

Gearoid McKiernan and Niall Sludden swapped points, and Kennedy was denied a goal by ‘keeper Raymond Galligan, who saved with his foot after the Derrylaughan man had been sent in by Cathal McShane.

Morgan concreted the resultant ’45 and Tyrone were on a roll, hurting their opponents with their strong support play and willingness to commit players to the offensive effort.

They hit seven points on the spin, three of them from Darren McCurry, who drifted out deep to find space and possession in which to execute his sublime finishing skills.

Colm Cavanagh and McShane also got in on the act with neat conversions, before the Breffni men ended a 16 minutes barren spell with their first point from play, hooked over by substitute Conor Madden in the 28th minute.

But Tyrone were calling the tune and striking sweet notes as they continued to dominate, McShane’s third converted free sending them in with a commanding 0-12 to 0-3 lead.

Padraig Faulkner, Killian Clarke and Conor Moynagh did all they could to close down the danger men, but to no avail. With Michael Cassidy and Mattie Donnelly breaking tackles as they worked for the greater cause, Tyrone were always able to find the man in space, with Niall Sludden and Harte adding further points.

And when Clarke was dismissed on a black card after 45 minutes, one of Cavan’s most solid defensive lynchpins was gone.

By the end of the third quarter, the Red Hands had soared 12 points clear, switching to a more direct route, with long balls from Kieran McGeary and Harte picking out target man McShane, who duly slotted over a couple of scores.

Cavan heads were down as they began to accept an inglorious end to a season that has promised so much, and the end effectively came on 61 minutes when substitute Ben McDonnell fetched a booming Colm Cavanagh delivery to roll his shot to the net from close range.

Goalkeeper Morgan did have a shot to save late on from Conor Madden, but there was little else to trouble the Tyrone defence on a dominant afternoon.