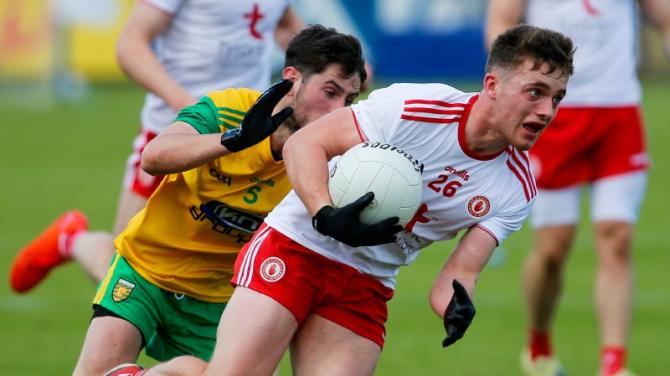 The Red Hands have once again been plunged into the sudden death lottery of the Qualifier route, but they will embrace the challenge with confidence, having taken the circuitous journey all the way to the All-Ireland final last year.

Donegal had their homework thoroughly done, and pinpointed all Tyrone’s strengths, targeting key players and cutting off supply lines.

And having struck for an early Jamie Brennan goal, they grew in confidence as the game progressed.

Tyrone lost key player Peter Harte after just ten minutes to a black card, and his influence was badly missed.

They did create goal chances, but failed to finish clinically, and paid the price as their opponents pulled clear.

Mickey Harte’s side finished strongly, closing to within four points, but in truth, Donegal were convincing winners on the day, and never looked likely to be denied their place in the final.

“We intended to perform much better than we did. At least get a better outcome than we got. I suppose there were a few key incidents in the first half that changed the script of the game; one of them being the sending off of Petey Harte for this magnificent black card which, for me, didn't fit any of the criteria necessary for a black card.

“I always thought it was a deliberate pull down, a trip by hand or foot or obstruction of a player after the ball is played. To me, it was a mis-timed tackle and it had a crucial impact on the outcome of the game.

“The early goal for Donegal, those two things together it left us in a very bad place pretty early in the game.”

Tyrone trailed by seven points at the break, and had a mountain to climb on what had been a difficult afternoon right from the first throw-in.

“That was a pity too because there was a stage we could have made it a one or two point game when we missed a few chances and they came back and kicked a few on.

“We kicked a few goal chances, a couple of them good saves by all means, but if we had have went in with a goal of our own it would have took the sting out of the one we conceded and made it a fight to the end.

“As it was, I suppose we were always chasing the game. Seven points against any team is a hard one to claw back and whenever a team get ahead, especially one like Donegal who know how to organise themselves and hold onto a lead.”

“To an extent, yeah. Maybe it is quite ineffective if you are not putting it in. Maybe that was part of the reason it was ineffective.

“The game was always going to be different, you weren't going to get playing the way you could, you had to be patient and work it around. Getting the optimum time to put it in is not always easy and I suppose Donegal being ready for that made it more difficult.”

Harte said he did not see the incident involving Tiarnan McCann which led to allegations of gouging.

“I wasn't looking through the lens of a TV, as you might well imagine. I was standing on the sideline as I always do. If something happens a distance away from me, I cannot see every detail that goes on.

“You obviously had a better view of that than I have, because I know nothing about it.”

Now the Red Hands must plot a course through the Qualifiers back to the business end of the Championship, as they did last year, when they lost their Ulster Championship first round game, before re-grouping to go all the way to the All-Ireland final.

“There’s not much choice. It’s good that the Qualifiers exist, that’s for sure, because if they didn’t, we’d be out of the Championship altogether now,” said the manager.

“At least we have this second chance, and I suppose historically we have made a decent hand of availing of that opportunity.

“But again, it’s all to do with the luck of the draw, who you get in the first round or the first Qualifier that we play, and do we get a chance to build a bit of momentum again before you meet serious, serious opponents.

“So that’s all in the lap of the gods now. we don’t believe we’re a bad team just because we lost a game today, because we had a very good finish to the League, we were in the All-Ireland final last year,  and one defeat in the Ulster Championship shouldn’t take away from all that.

“It’s just a bad day today, we didn’t perform as well as I believe we can, and obviously there’s always two reasons for that – perhaps we didn’t play as well as we can, but obviously the opposition have a lot to do with that as well.”

Harte took a number of positives from the game, not least the fact that his team was still pressing for a result in the closing stages.

“That’s probably the pleasing for us, that we didn’t throw in the towel, and we did fight on. Donegal were playing a lot of the game on their terms, and we had to work very hard to try and break that down and try and get some kind of control of our own on the game, and I think we did that at certain times.

“We still picked off a number of scores there that didn’t let them rest on their laurels, they had to fight to the end as well.”

The defending provincial champions squeezed their opponents out of the game with a tenacious, relentless workrate that frustrated the Red Hands, who in the end were flattered by the four points margin of defeat.

It was a first win in four Championship clashes with their north-west neighbours for Donegal, who go on to defend their title I the Ulster final against either Cavan or Armagh.

Brennan struck a major blow in the fourth minute when he collected an Eoghan Ban Gallagher pass to smash home a goal.

That score gave his side a 1-1 to 0-2 lead, Tyrone having gone ahead early om with points from the Donelly brother, Mattie and Richie.

In front of a crowd of 13, 579, Murphy was drifting deep, finding acres of space and getting on plenty of ball as Declan Bonner’s side pushed forward, and the team captain thumped a ’45 between the posts.

Brennan swept a fine effort between the posts to cancel out Kieran McGeary’s score, and Tri Chonaill still led by three when the Red Hands suffered a blow as they lost the influential Peter Harte to a black card for a challenge on Ryan McHugh after ten minutes.

Brennan was proving too hot to handle for Michael McKernan, and he stole away again to get on the end of a Paddy McBrearty assist, but fired a fierce shot against a post – a real let-off for the Red Hands, who countered for Cathal McShane to slip free of Paddy McGrath’s clutches and shoot a point.

Murphy missed a couple of opportunities from placed balls, but displayed his outstanding class as he powered past Padraig Hampsey to steer over a gem from play, and with 20 minutes played, his side led by 1-4 to 0-4.

Without abandoning their dearly-held defensive principles, both sides displayed ambition and positivity in pushing forward, particularly Donegal, whose effective pressing in the central area also restricted the effectiveness of Tyrone’s long ball strategy.

Twice the Red Hands did break through, however, to get shots at goal away, but ‘keeper Shaun Patton got his angles spot on as he advanced to deny Brian Kennedy and, in stoppage time, Richie Donnelly.

Murphy kicked his fourth to open out a seven points gap, 1-9 to 0-5 at the break and Declan Bonner’s side firmly in control.

McShane and McGeary narrowed the gap as the Red Hands resumed with urgency and tenacity, but soon they were putting themselves under pressure with unforced errors, and were almost punished when Ciaran Thompson broke clear, his shot saved by Niall Morgan.

Murphy and McBrearty slotted over frees, and six points separated the sides at the end of the third quarter, 1-11 to 0-8.

With Eoghan Ban Gallagher making ground along the right flank, drawing in defenders and breaking tackles, Donegal’s potency was on the rise.

McBrearty, scoreless until the 53rd minute, now had three to his name as he steered over a gem from wide on the left, and Tyrone looked flat and lacking in ideas.

But Darren McCurry came off the bench and added a much-needed spark to the Tyrone attack, kicking three points, with Michael Cassidy also coming in to rifle a shot just over the bar.

But this was always going to be Donegal’s day as they finally turned the tables on their great rivals.