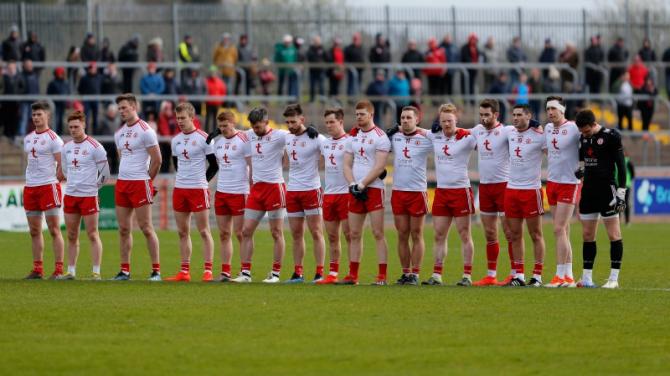 A CONVINCING win over Galway wasn’t enough to earn a place in the National Football League Division One league final for Tyrone, with results elsewhere effectively bringing their campaign to an end.

Nevertheless, Healy Park was a happy place for Red Hand fans, who watched their team extend an unbeaten run to five games.

They came from seven points behind to win by seven, hitting three second half goals to rout the Tribesmen and deny them a place in the NFL decider.

Peter Harte, Mattie Donnelly and Conall McCann all hit the net as the home side turned the game around and maintained an impressive run of form.

Trailing by seven at half-time, the Red Hands had a lot to do, but manager Mickey Harte was pleased with much of what his side had done in that opening period.

“I felt at half-time the score-line didn't reflect how much we were in the game,” he said.

“And goal chances too and we didn't take them. Even though the score was pretty poor for us, I still felt this was a winnable game, given the strength of the breeze that was there.

“It was going to be important to get the early scores and get back into contention quickly and get back within a few points. After that, I think our players excelled and pushed on with a few points to spare.”

It was a penalty award early in the second half that gave the home side a vital foothold in the game, with Peter Harte slotting the kick low to the net.

“Well goals are very important in games and Petey is a good striker of a penalty. Once we got that and the early points with it, it gave us the confidence that this game was within our touching distance.

“When you are seven points down, it looks like a tall hill to climb and no matter how you claw that back, it still keeps the gap, something that is hard to chase.

“The fact we held them out for so long, we went ahead before they got a score, which was really crucial to win this game.”

Another star performer was Michael Cassidy, who came into the side as a pre-match replacement and turned in a mighty performance, embroidered by two brilliant points.

“He certainly did, I’m really pleased for him. He had to wait a good while to get his opportunity. He probably missed out on serious training before Christmas and into January because he went away to Australia to see his brother, so he had eight or 10 weeks that he was missing so it maybe took him that time to catch up on the fitness levels required.

“But he was given a chance today and he grabbed it with both hands.”

Cathal McShane has been  revelation as target man, getting vital scores and creating opportunities for team-mates, and he finished with a four points tally.

“We know and hope that maybe others will realise that Cathal McShane is a very good footballer, and he’s a game character. He fights for everything, he battles for everything.

“The things that he doesn’t win doesn’t faze him, so he’s a really good player, and the many things that he has to offer are good for this team. So yeah, it’s something that we didn’t have for some time now, and it gives us another option as well as the running game.

“We do have an option to kick the ball in, and it tends to be quite effective.”

Harte edged the Red Hands in front from a free, but it was Galway, raiding on the counter-attack, who struck the next three scores.

David Wynne got forward to help set up a score for Johnny Heaney, and provided the searching delivery from which Michael Daly punched over a point, and it was Walsh who sent over a free for a 0-3 to 0-1 lead.

The home side, playing into a strong wind, responded with scores from Peter Harte and Michael Cassidy, but in the 17th minute the Tribesmen struck for a goal.

Antaine O Laoi sent in a tantalising delivery, and Danny Cummings rose to punch to the net. And when Walsh followed up with a couple of free, they led by 1-5 to 0-4.

The Red Hands struggled to break down a Galway defence in which John Daly and Gareth Bradshaw stood firm, but Mattie Donnelly found a way through to knock over two quality points.

In the final ten minutes of the half, Galway pushed up on Niall Morgan’s kick-outs, to devastating effect, and they out-scored their opponents by six points to one in those closing stages, with Walsh, Michael Daly, Gareth Bradshaw and Heaney all hitting the target for a 1-11 to 0-7 interval lead.

Now facing the wind, Galway retreated deep into their own half, but were unable to withstand the Red Hand onslaught as they hit 1-2 in the opening eight minutes of the second half.

It was in the 44th minute that Sean Andy O Ceallaigh conceded a penalty by dragging down McShane, and Harte slotted the kick to the bottom corner of Ruairi Lavelle’s net.

And a defensive disaster for the Galway men saw Mattie Donnelly presented with an open goal after O Ceallaigh attempted a back-pass to goalkeeper Lavelle, apparently unaware that he had wandered from his post.

Donnelly slotted the ball, soccer-style to the net from 25 metres, and suddenly Tyrone were in front.

Galway played the final 20 minutes with 14 players, with Eoghan Kerin’s return from the sin-bin coinciding with Gary O’Donnell’s departure on a second booking.

And the home side finished the job off with a third goal in stoppage time from substitute Conall McCann.

VACCINATIONS to combat COVID-19 are continuing to be rolled out across Mid-Ulster.