O'Hagan sees red at ref as Coalisland crash out 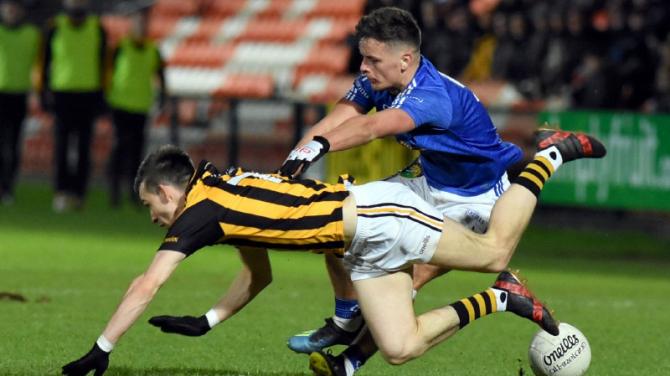 COALISLAND manager Damian O’Hagan vented his fury at referee Martin McNally after his side crashed out of the Ulster Club Football Championship following a narrow defeat to Crossmaglen.

The Monaghan official sent off two Fianna players in the first half of a bruising quarter-final at the Athletic Grounds, and while the Tyrone champions put in a heroic display, the loss of Brian Toner and Eoghan Hampsey at such an early stage of the game had a significant bearing on the outcome.

The Armagh champions were also reduced to 13 men later in a controversial contest, but the impact on them was less telling.

In the closing stages, the Rangers had more fuel left in the tank as they finished strongly to set up a semi-final clash with Gaobh Dobhair of Donegal.

“The referee lost his way, he wasn’t at the races,” said an angry O’Hagan.

“I listen to other managers crying about referees, but this referee was totally out of his depth this evening. He lost his way, he tried to redeem himself.

“What can I say? I’m know I’m out of the Ulster Championship, Coalisland are going home beaten.”

Toner was sent off after picking up a second booking, but the dismissal of Hampsey on a red card moments later baffled the Coalisland boss.

“I don’t want to be talking about referees, I’d rather talk about Crossmaglen and the lovely football that they played, and the football that Coalisland played, because we were there with them, and with five minutes to go, sure it was anybody’s game, and we had opportunities and we didn’t take them.”

O’Hagan conceded that Cross deserved their win in the end, and he was full of praise for their style of football.

“Cross beat us at the end, they were the better team at the finish-up. I have to say I admired their football in the last 15 minutes.

“They took the knocks that we took in the first half, and good luck to Cross, they’re a god footballing team

“I thought it was a good match, and we’re going home thinking about the scores we missed. We had opportunities in the second half to put Cross away and we didn’t do it. They took their opportunities and good luck to them.”

But the former Tyrone star was disappointed with his own side’s efficiency in front of the posts.

“We have been ruthless up to now, and we just hadn’t the legs. The heavy going in deep sand maybe took the legs from us a wee bit.”

O’Hagan felt the vast experience of a Crossmaglen side which has won 11 Ulster titles was a key factor.

“Very important. In the key positions, they held their heads, and they got themselves over the line, and I admire them for that. In positions like that, whenever you get the taste of blood, you have to go and take it. We didn’t take it in front of goals at the finish-up, we had a few shots wide, we had one where we tried to slice the ball over the bar with the outside of the boot when there was a man clean through on the inside for a goal. That would have made a serious difference to the game.