Tyrone to face off with Kingdom in league opener 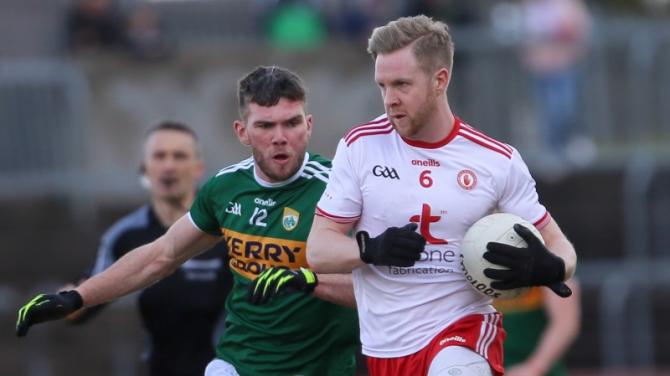 TYRONE will begin their 2019 National Football League campaign with a trip to Munster to take on Kerry in a high profile opener.

The provisional fixture list has been released, and the Red Hands will have four home games in their NFL Division One programme.

Included in their three away ties is a return to Croke Park to take on a Dublin side that came out on top in the All-Ireland final earlier this month.

Four of the seven teams Tyrone will face in the league will have new managers, following a major upheaval towards the end of this year’s championship campaign.

The league starts earlier than usual next season, with Tyrone travelling to either Killarney or Tralee on Sunday January 27 to face a Kerry side stacked with exciting young talent.

It’s a tough opener, but if the beaten All-Ireland finalists can emerge with a positive result against a Kingdom side under new management following the departure of Eamonn Fitzmaurice, it could launch a strong challenge for league honours.

Their next opponents will also have a new man in charge due to the resignation of Stephen Rochford as Mayo manager.

The westerners travel to Healy Park on Sunday February 3 for a fixture in which Tyrone will be hoping to maintain their impressive league record.

Newly promoted Roscommon are the next opponents, and they will be looking to reverse a heavy Super 8s championship defeat by Mickey Harte’s men at Croke Park last month.

They too will have a new manager in place by the time that Hyde Park tie comes around on Sunday February 3, following Kevin McStay’s decision to step down as Rossies boss.

The Farney men were narrow winners in last year’s league encounter, and also came out on top when the sides met in the Ulster Championship tie at Omagh, but it was Tyrone who triumphed when they crossed swords again in the All-Ireland semi-final.

All three games were extremely close, and another highly competitive contest is assured next spring.

Next up is the much-anticipated clash with the Dubs in a Croke Park floodlit encounter on Saturday March 16, and by that time, both sides could be pushing strongly for a place in the NFL final.

Tyrone round off their Division One campaign by hosting Galway at Healy Park on Sunday March 24.

And Tyrone manager Mickey Harte has insisted he full intends to manage the county into a 17th season.

Harte has no intentions of walking away from the role, and he is relishing the challenge of taking his team to a higher level in 2019.

“The first year of my three-year term is just over and I have no real desire to walk away from it all. No, not at all,” he said.

Harte paid tribute to the work rate of his players and added that he felt if any team is going to break Dublin’s monopoly then it will be Tyrone.

“The players put in tremendous work, they are a dedicated bunch of athletes. They gave it their very best and, but for a few things that happened during the course of the game, we might have had something special home with us.

“If I was putting money on anybody to do this in the next short while then I would say this is the place to put it.”

Harte spoke of the disappointment of losing out to Dublin in the All-Ireland final.

“We did our best, we had our chance to maybe make better of it, but it didn’t happen.

“The story doesn’t always end the way we would like it to, but the story goes on, and this story will end some day in a place where we will be back here and there will be a big piece of a cup here beside us.

Harte revealed that he had expected the post-match banquet at Dublin’s Citywest Hotel to be a downbeat occasion, but it proved to be the opposite.

“We had a banquet in Dublin, and I was not looking forward to it one bit, because we had been lucky enough to have three previous banquets where we had the cup, and everything was perfect then, the perfect ending to the story of the year.

“This was the first time we were going without the Sam Maguire, and I thought it was going to be a fairly damp squib.

“Well, it was anything but. It was a real night of celebration, a real sign of the appreciation, of what the people of this county thought about what this team did during this year.

“And I must say, the players embraced that too, and they enjoyed the occasion. So I think it’s a credit to them that they took this on the chin and they are ready for more.”

Meanwhile, team captain Mattie Donnelly believes the Red Hands have closed the gap on Dublin by more than the six points they sliced off last year’s All-Ireland semi-final losing margin.

“I definitely think that the gap between us and Dublin has now been closed by more than half,” he said.

“We’re starting to get into a template as to how we can play. But again there’s two big things of game management and shot conversion that we really need to address.

“There’s a lot of development within this team during the past year and I’ve no doubt that it will be maintained. All the players are at a good age, and committed to learning. If we’re to make the final step, then we’ll have to make that mark.

And Donnelly has no doubts that every player in the squad is determined to do whatever is required to take Tyrone that extra step and back to greatness.

“Knowing the boys in the dressing-room, they’re more than willing and able to make that step and continue the learning and improvement. I always believe in the players.”

The Red hand skipper is struggling to come to terms with the disappointment of losing out to a great Dublin side in the Sam Maguire Cup decider.

“It’s utterly, utterly devastating and so hard to take.”

He feels decision-making on two fronts played a part in Tyrone’s failure to halt the Dubs’ drive for a fourth successive All-Ireland title.

Shot selection on the part of his players and a bit call by referee Conor Lane combined to leave the Ulster men chasing the game throughout the second half.

“We started the game exactly the way that we intended to do. I suppose our old bogey of shot selection and shot conversion kind of killed a bit of our momentum from the start.

“Then there was the massive call from the referee for the penalty. Obviously that also stopped us in our tracks, but this is still a massive learning curve for us as a team.

“It’s clear that our shot selection and conversion can really go up. Even dealing with momentum changes a bit better is something to look at as well and both things would make a massive difference to us.”

And when Dublin got their noses in front, they showed once again that they are experts in consolidating and holding on to the advantage.

“If you give them a seven-point gap then it’s always going to be very hard to get back and we knew that. But then we said that in the first 15 or 20 minutes we were more than seven points the better team than them so there was no reason why we couldn’t do that in the second half.

“I suppose we continued to chip away at their lead after half-time, but we just didn’t take all the chances that came our way. I suppose you need to be doing that because I don’t think that they had a wide in the second half. That tells its own tale.”

“Our penalty goal came with about 10 minutes left, so we felt that if we had got another point or two then we might have had them on the rack.

“But again we didn’t capitalise, and they deserve credit for going up and get another point or two.”