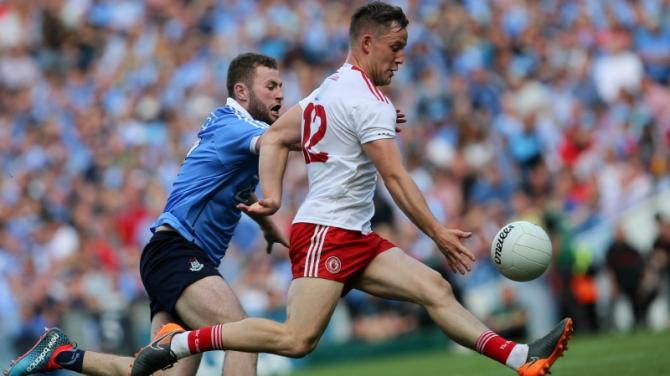 KIERAN McGeary had a fervent belief in his heart that Tyrone could climb a mountain that no other county had been able to scale.

And when they went four points ahead of the Dubs in a blistering opening at Croke Park, his dream of winning an All-Ireland title became even more vivid.

But his world was to come crashing down, and two goals before half-time left the Red Hands with a massive task, one they were unable to complete.

Dublin were on their way to a fourth successive title as they led by seven points at the turnaround, and while Tyrone matched them score for score in the second period, they were unable to close the gap.

“You take your eye off the ball for a second and Dublin punish you. That's what ruthless teams do,” said McGeary.

“We got off to a flyer, probably a better start than we were expecting.”

But when Mattie Donnelly was harshly penalised for a challenge on Paul Mannion on 20 minutes, the game took a crucial turn in favour of the Sam Maguire Cup holders, with Dean Rock smashing home the resultant penalty.

“The penalty was a controversial decision, I haven't seen it myself, and that brought it back level, then they went into the lead,” said McGeary.

But the Pomeroy man epitomised Red Hand spirit as they fought back courageously in a bid to get the better of the greatest team of the modern era, possibly the greatest in the history of gaelic football.

“In an All-Ireland final, it's all about being efficient in your passing, moving and shooting. If you're not efficient, it will come back to bite you. We know how efficient Dublin are and the type of scores they rack up during the championship.”

Looking at a seven points deficit at the turnaround, Mickey Harte and his management team faced a massive challenge, and while changes to the approach were made, the Dubs were able to counteract everything that was thrown at them.

“We knew that was a potential situation we could be sitting in though maybe we didn't anticipate how far we'd be behind. Look, the only thing you can do is fight back.

“We probably threw in the towel last year in the semi-final, we definitely didn't do it this time. We talked about structures, positions. We knew if we could narrow the gap the bench could come on and drive us on and they did. But again, credit where credit is due to Dublin.”

But McGeary believes that Sunday’s All-Ireland final, even in defeat, could be a defining moment for Tyrone football

“Dublin have had their dark days – go back to the early noughties when Tyrone were on top of them. A spark was lit for them at one stage and hopefully there was a massive spark lit for us today.

“We always talk about learning and learning from what happens in games and there's no better game to learn from than an All-Ireland final.

“They are a level above everyone, it's there to be seen. But you can't set a peak forever. They've set the bar, but teams will catch them. We'll go away and address it and see what lies in the future.”

Tyrone were left to chase goals in the latter stages, and while they did get one, from a Peter Harte penalty, the Dubs never showed any sign of panic.

“We knew that if we got a goal there was potential of a comeback. Unfortunately they keep their heads and didn't show any fear. They pushed on and fair play to them.

“Only one of today's starters played in the 2008 final, Colm Cavanagh. Nobody else had played in an All-Ireland final, even the likes of Matty Donnelly and Petey Harte. They've never had that opportunity so it was new for them. They're our leaders and it was their first time as well. It was a rollercoaster for everybody.

“The build-up was fantastic. The Tyrone people really got behind us and we're more than grateful for that, the county was rocking for three weeks steady. Anyone you met always had best wishes and you'll always remember that side, it's just unfortunate we don't have the big tin guy with us.”

Meanwhile, Dublin manager Jim Gavin carried the persona of a man on a mission, an ultra-ambitious perfectionist with unfinished business to attend to.

He had just guided Dublin to a fourth successive All-Ireland Senior Football title, but it as with the coolest composure that he faced the media underneath the Hogan Stand just a few minutes after Stephen Cluxton had accepted the Sam Maguire Cup for a remarkable fifth time as winning captain.

It’s the ultimate accomplishment in gaelic football, but there was an inescapable feeling in the air that Gavin regarded this latest triumph as much as a means to an end as the remarkable achievement that it was.

Only a fifth straight success would set the Metropolitans apart as the only county to achieve that feat, and the likelihood is that this driven tactician and leader of men will get to work on that particular project first thing Monday morning.

And few would question this great Dublin team’s capacity to script an unprecedented story of success, following their 2-17 to 1-14 win over Tyrone.

Gavin showered all the praise on his outstanding group of players.

“The collective ethos they have, they see the prize serving the county, not the self,” he said.

“You have players there that didn't get game time, they didn't show it, but they must be disappointed not to play in an All-Ireland Final. They just want the team to do well. It is team, team, team and I think they have demonstrated that again today.”

Gavin, who also experienced victory over Tyrone in an All-Ireland final as a player, back in 1995, never felt that his team was comfortable until it was all over.

“I wouldn't say we were that (cruising). In a contest and in a final as we have experienced the last number of years when it comes down to the last two teams they are going to give everything.

“No surprise there from Tyrone. They are an outstanding team. My admiration for them went up tenfold after the game the way to a man, unprompted, they stayed on the pitch to see the Dublin guys come down from the Hogan Stand and the respect that they showed to the opposition it is very humbling to see that.

“Going into the game we knew it was going to be a very tough battle, they go 0-5 to 0-1 up, they have the momentum, but our guys don't blink which is a great characteristic to have.

“We just keep going through the phases to get ourselves back in the game. Even at half-time it is only a break in play, it still needs to be finished, the guys just kept with our process of going through each phase of play. They are going to come back, you see the subs they brought on, they finished with a really strong, offensive, attacking team.”

Tyrone fought to the bitter end, pulling back one goal and pushing relentlessly for a second, but the boys in blue held firm at the Canal End.

“Putting Colm Cavanagh into full forward showed their intent, they really went after it and they left everything on the pitch. I've just left the Dublin dressing room and those guys are completely fatigued after a fantastic battle. I'm just really happy for them that they have come out the right side of it. Possibly it could have went the other way in the closing stages, but we did enough to see it out.”

“It is an All-Ireland Final, there is a lot on the line so players are pushing each other really hard. It is a physical contact sport, it is what it is. Some great exchanges. The GAA should be very proud of both teams, of both counties, the spectacle that they put on today with some great scores.

“The attacking phases were quite equal, we were probably just a bit ahead of them on the efficiency rate and that is a credit to the Dublin players. We go after the skills of the game, we have worked hard at that in the last number of years and we probably got due reward. In the opening 10 or 15 minutes a little bit wayward, the Tyrone boys put them under pressure, but the mental resolve in that Dublin team is just a pleasure to witness.”

And the Dublin boss paid tribute to Tyrone, who played with pride right to the end, even through the game was slipping away from them from an early stage.

“The guys just kept with or process of going through each phase of play. They were gonna come back, you saw the subs that they brought on, they finished with a really strong offensive, attacking team.

“Putting Colm Cavanagh into the full forward lien showed their intent. We went after them, and they left everything on the pitch. Those guys are completely fatigued from a fantastic battle, and I’m just really happy for them that they have come out the right side of it.

“It possibly could have gone the other way in the closing stages, but we did enough to see it out.”

He added: “We have worked hard over the past couple of years, and we have probably got due reward. Obviously the opening ten or 15 minutes we were a little big wayward, but the Tyrone boys put them under severe pressure.”