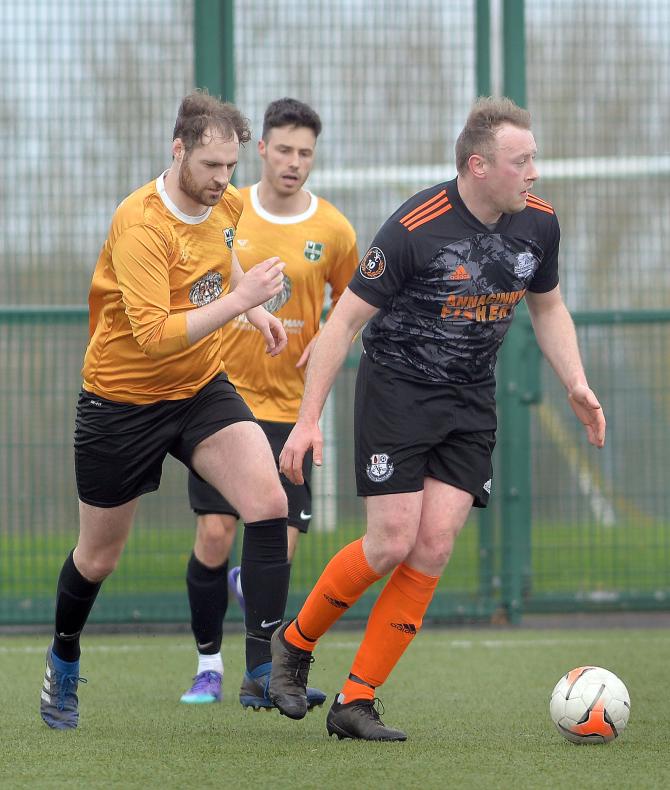 NEWMILLS Football Club hosted Caledon Rovers on Tuesday past in an entertaining game in the Mid Ulster League with some excellent football and goals on show.

After a slow five minutes, the home side clicked into gear and opened the scoring with 10 minutes on the clock, Simon Kerr smashing a volley from the edge of the box only for the Caledon goalkeeper to save it, nonetheless R. Stinson was first on the scene and reacted first to the loose ball inside the box and calmly converted from close range.

Kerr was provider again, taking a delightful touch around the Caledon defender and using his pace to drive into the box before he selflessly squared the ball to the prolific Mark Burns, who made no mistake with the finish to make it 2-0.

It went from bad to worse for the away side, when soon after it was 3-0, George McFarland picking out Black on the right hand side with an inch perfect pass in behind the full-back but his effort was well saved, however captain Smyton was sharpest to react and got to the loose ball first, poking home from close range.

Caledon responded well, the visitors' wide man pulling them back into the game with a fine goal from outside the area giving J. Willis no chance in goals.

Newmills weren’t knocked off their groove however and played some fluent football with the away side’s midfield struggling to cope with the movement of the ball and it wasn’t long before the three-goal cushion was restored. McFarland rolled back the years with some fancy footwork before finding Kerr who played the ball into the path of Stinson and he smashed it first-time from range straight into the top corner. A goal of the season contender worth watching repeatedly on the club's YouTube channel.

Burns nearly made it five in a rampant first half performance, but his free-kick rattled the bar and Newmills went in at the break 4-1 up.

The second half started the same as the first had finished and it was the turn of the opposite full-back to get on the score sheet, Farrell getting a rare goal after a brilliant team move. Black, Farrell, and Gibson all combined before Black split the defence to find Farrell on the underlap, he was on one-on-one with the onrushing goalkeeper and calmly finished into the bottom corner to send the crowd wild.

Caledon, however, didn’t give up and responded well, upping the tempo and starting to cause some problems for Newmills during a slack 15 minute period and they got their reward, pulling two goals back, the second a beautifully hit long range effort into the bottom corner.

Newmills got back to grips with the game and it was the talisman Burns who extinguished any hope of a Caledon comeback with a perfectly placed free-kick to restore the three-goal cushion.

The home side still looked hungry for more in the later stages but for some last ditch defending and a clearance of the line from Boyd’s effort and the entertaining game finished 6-3 to Newmills who moved back into fourth spot in Division 1.