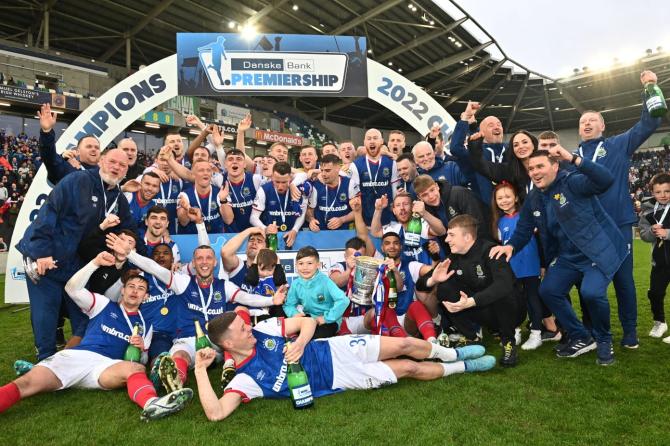 Linfield have won the Danske Bank Premiership by just one point from Cliftonville.

The title race had gone down to the last day, with the Blues hosting Coleraine while Cliftonville travelled to Glentoran in a final day shootout for the Gibson Cup.

With Linfield being held 0-0 at Windsor Park, Cricky Gallagher gave the Reds the advantage in the title race, scoring against his old club at the Oval after 19 minutes.

But before half time the battle for the Gibson Cup had swung around the other way. An emphatic header from Ben Hall two minutes before the break put Linfield in front against Coleraine, and Chris McKee doubled the lead in stoppage time.

Back at the Oval Chris Curran gave the Reds a second goal midway through the second half, but Seanan Clucas pulled a goal back for the Glens with less than 10 minutes to go.

However, Linfield showed their class to hang on and give manager David Healy his fifth Gibson Cup and Linfield’s 56th title.

In the other game in the top half of the Premiership Larne beat Crusaders 2-1 at Seaview. Two Davy McDaid goals were enough for Tiarnan Lynch’s side, with Aidan Wilson pulling a goal back for the Crues a minute from time.

The results mean that Glentoran have finished third in the table, with Crusaders fourth, Larne fifth and Coleraine sixth.

In the bottom half of the table Warrenpoint Town ended their time in the Premiership with a win over a young Glenavon side at Mourneview Park.

Joshua Wilson gave the ’Point the lead but Josh Doyle levelled the scores for the hosts on the hour mark. Substitute Alan O’Sullivan popped up with a well-placed stoppage time winner for Barry Gray’s side, who now look to life in the Championship.

A much-changed Portadown side, who have an eye on their forthcoming promotion/relegation game against Annagh United side, was hammered 5-0 by Carrick Rangers at Shamrock Park.

A brace for former Ports player Mark Carson, along with goals for David Cushley, Jordan Gibson and Reece Glendenning rounded off the season on a positive note for the Taylor’s Avenue men.

And in the day’s other game, Ballymena United fought back from a goal down to beat Dungannon Swifts.

The Swifts had been given the lead through a Jordan McMullan own goal, but Paul McElroy and an Andy McGrory penalty on 87 and 90 minutes respectively gave the Braidmen the win.