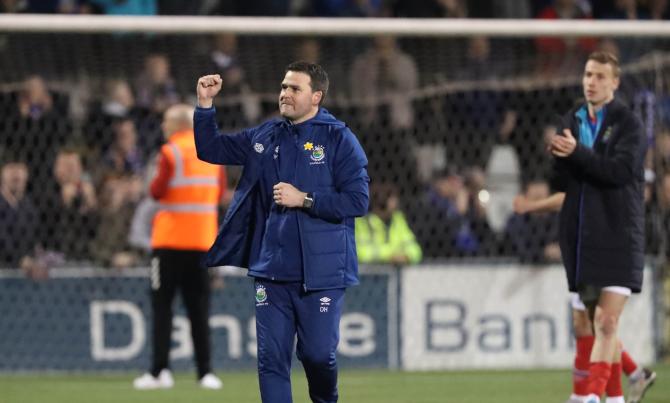 The Danske Bank Premiership looks set to go down to the wire after the top two both won their Easter Tuesday fixtures.

Linfield were 2-1 winners away to Crusaders while Cliftonville enjoyed success by the same scoreline away to Coleraine.

The victories mean there is no change at the top of the table, with David Healy’s side one point clear of Paddy McLaughlin’s men with just two games remaining.

Jimmy Callagher had given Linfield the lead at Seaview before Jordan Forsythe pulled the teams level before half time.

However, Ethan Devine scored a 70th minute winner to keep the Blues on top of the table.

Up at the North Coast a Ryan Curran penalty and a goal from Joe Gormley kept Cliftonville in touch at the top of the league. A late Eoin Bradley goal gave the Bannsiders, who have now won just one of their last 11 games, hope but it proved to be scant consolation.

In the bottom half of the table Warrenpoint Town’s fate has now been sealed, despite a 1-0 victory over Ballymena United.

Ray O’Connor’s goal proved not to be enough to keep the Milltown outfit up as Portadown secured a vital point in a 0-0 draw at Shamrock Park against Dungannon Swifts.

The Point’s win also has an impact for Glenavon, who move four points clear of the Sky Blues in the race for the final play-off spot after a late Michael O’Connor free kick secured a 1-0 win for the Lurgan Blues.

The evening’s other game between Glentoran and Larne finished 0-0.