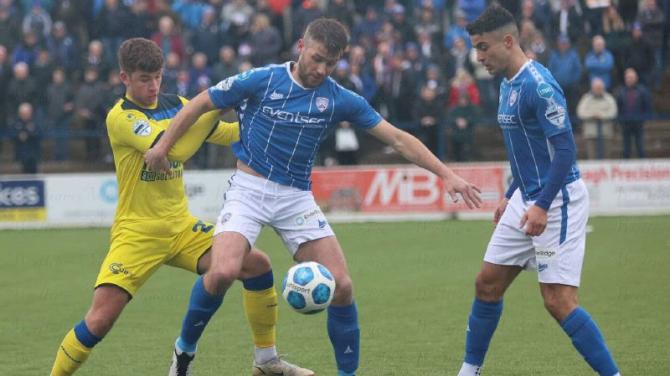 A GOALKEEPING crisis at Dungannon Swifts has left manager Dean Shiels desperately trying to come up with solutions.

For the second game in a row on Saturday, the Swifts were forced to play goalkeeping coach Dwayne Nelson in nets despite the 37-year-old picking up a medial knee ligament injury in training the previous Thursday night.

Speaking after Saturday’s 2-0 defeat at the Coleraine Showgrounds, Shiels said: “We came here with four goalkeepers unavailable and our goalkeeping coach (Dwayne Nelson) had to play last week and he got injured on Thursday night by doing his medial ligament and was told he’d be out for two months.

“We spoke to the league about trying to get leeway in terms of bringing in an emergency loan or getting the game called-off but we had no other choice.

“It was either we played an outfield player in goals or play an injured goalkeeping coach.”

The Swifts are now preparing for an important game this Saturday at home to Portadown.

“I don’t think we will have any goalkeepers back,” he said.

“I don’t think the situation will be resolved in the coming weeks, so we will have to see where we are at in terms of injuries.

“We tried to bring one in but we hit dead ends there all over the place.

“It is disappointing but these challenges are thrown at you throughout the season and we have to deal with them as best as we can.”

Despite the scoreline, Shiels said there were “lots of positives” from Saturday’s performance.

“We had to come here and compete at one of the hardest places in the league and I thought we stayed well in the game at times,” he said.

“We looked solid, limited them to very little clear cut chances and obviously Coleraine have that quality in the box that can punish you if you’re not tight enough.

“Overall, I thought we competed well and there’s lot of positives to take into next week.”

The game got off to a quiet start with only a Ronan Wilson effort from distance going wide and Cathair Friel's looping header over the bar providing a couple of rare moments of promise.

But that all changed just after the half-hour mark when Jamie Glackin fired over a first time cross from the right for Matthew Shevlin to direct a header past Nelson to open the scoring.

Coleraine then doubled their advantage four minutes into the second half. Glackin again provided the crucial ball into the area, which Shevlin then knocked on for Friel to head beyond Nelson.

The Bannsiders might have extended their lead later in the half with efforts from Josh Carson. The first, a half volley from Lyndon Kane's cross, went over, while an effort from an acute angle was tipped around the post by Nelson.

Ahead of Saturday's clash with Portadown at Stangmore Park, Dungannon take on Warrenpoint Town tonight (Tuesday) in the semi-final of the Euro-Electrix Mid Ulster Cup at Milltown. Kick-off is 7.45pm.