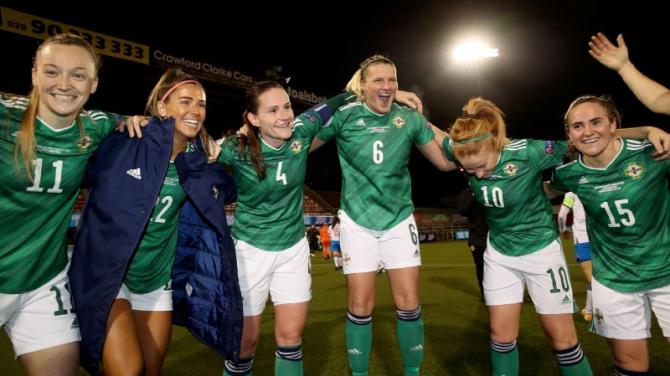 Samantha Kelly (number 15), from Castlecaulfield, celebrates with her Northern Ireland teammates after they beat the Faroe Islands 5-1 and clinched a play-off spot for Euro 2022 in England. SC205060

The 23-year-old from Castlecaulfield was a member of the NI squad which defeated the Faroe Islands 5-1 at Seaview in Belfast.

The victory sealed the three points the squad were looking for to secure second spot in Group C.

They will now prepare for a two-legged play-off match which will be played in April 2021.

Samantha, a former pupil at Royal School Dungannon, said the exciting exploits of Kenny Shiels’ side should be an inspiration to a new generation of football talent right across the Province.

“Women’s Football across Northern Ireland is already taking huge strides forward and I think Tuesday night’s outcome will magnify everything already happening and add motivation across the game.

“There are player pathways in place right through to senior level, the NIFL league is developing the top players in the country, and Kenny has made huge progress with the senior panel.

“The development of grassroots players through Irish FA and Electric Ireland Shooting Stars centres is also creating opportunities for girls across the country to play.”

The Glentoran Women’s star added: “There are a lot of people, coaches, players and volunteers who have invested in women’s football over the years – all culminating in last Tuesday night.

“As a team we’re delighted that they can share in this success and we’re hopeful that this success will help everyone build the women’s game further.

“Hopefully the young girls who are considering football can see from what we have achieved that it’s an incredible sport to play.

“Hopefully the girls already playing can now look at the international shirt and dream big.”