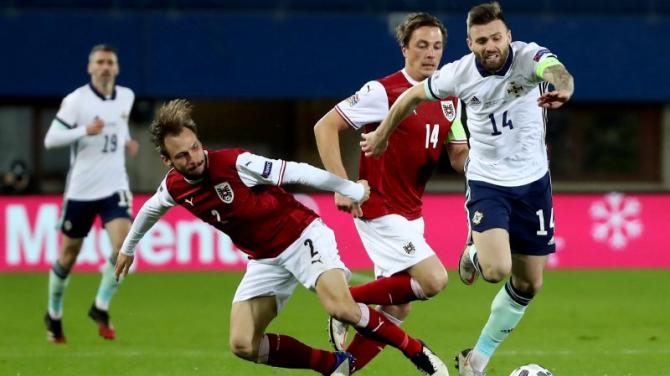 STUART Dallas has spoken of his pride at captaining Northern Ireland, saying: “I never ever dreamt I would captain my country.”

The Cookstown man wore the captain’s armband in Austria on Sunday night.

Unfortunately, it wasn’t the result the Leeds United star would have wanted as Ian Baraclough’s men suffered an unlucky 2-1 defeat in the Nations League.

It has been a disappointing few days for Northern Ireland after they were also beaten 2-1 in extra-time by Slovakia last Thursday night. The heartbreaking loss at Windsor Park saw Dallas and his team-mates fall at the final hurdle of qualification for next summer’s delayed Euro 2020 tournament.

The Slovakia game also saw Dallas earn a 50th cap for his country and he followed up that milestone by wearing the armband against Austria on Sunday evening.

The 29-year-old spoke of his pride at leading out his country for the first time.

“I never ever dreamt I would captain my country,” Dallas admitted.

“I have to thank the manager for giving me that opportunity. When Davo [Steven Davis] has come on at the end he told me to keep it, so I’m thankful to him for that as well.

“It shows the type of person he is. It’s just unfortunate that we couldn’t come away with something in the end.

“The Nations League hasn’t been kind to us in recent years, so it is important that we try and finish off this campaign with a win on Wednesday night [against Romania].

“It would give everyone a lift going into the World Cup campaign.”

Football fans across Tyrone and Mid-Ulster are rightly proud of the contribution of Dallas and fellow NI star Niall McGinn.

“To gain 50 caps is a tremendous achievement but to captain your country is the highest accolade a footballer can reach. No one deserves it more and he continues to do his country and hometown proud. A great example to our young people!” said Councillor Wilson.