A point well made 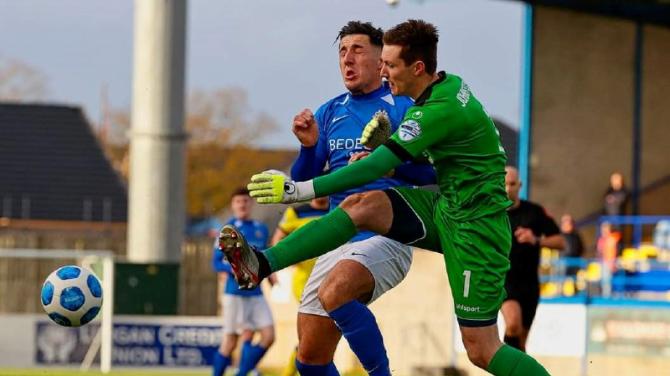 DUNGANNON Swifts got their campaign up and running with a first league point of the season courtesy of this scoreless stalemate with Glenavon on Saturday.

After defeats in their opening two games against Larne and Warrenpoint Town, Swifts boss Kris Lindsay would have loved to have seen his team sneak a late winner at Mourneview Park, and they even had the ball in the net during the closing stages.

However, the referee intevened to disallow the “goal” for offside, and Dungannon had to settle for a share of spoils.

“It was a well-earned point,” said Lindsay.

“We made a couple of changes and changed the shape a little bit after the game against Warrenpoint.

“Overall, our performance was pleasing. We played nice football at times and created a few chances. And we were reasonably solid at the back, so we’re happy to get our first point on the board and that’s obviously now a platform for us to build on.

“We rode our luck at times - they obviously missed a penalty - but I think we earned that luck with our performance and our commitment levels.”

Dungannon were up against a team which would have been absolutely buzzing after their nine-man heroics the week before when they came from behind to draw 1-1 with Glentoran.

But for the socially-distanced Glenavon fans inside Mourneview Park (no Swifts supporters were allowed to attend), it was a frustrating afternoon as Dungannon matched their Mid-Ulster rivals in all departments.

“Obviously, coming off the back of their result down at the Oval, they were in good spirits, but we managed to deal with the vast majority of the stuff they threw at us,” said Lindsay.

“They put a lot of balls into the box but I thought our defence stood really firm, our centre-halves won their headers and tackles, and our full-backs covered well, so I thought defensively we were sound enough.”

Glenavon enjoyed the best of the early opportunities with Daniel Purkis having a goal bound effort blocked by Dylan O’Kane while Sean Ward saw a shot from distance well tipped over by keeper Sam Johnston.

Indeed, Gary Hamilton’s team could have gone in front midway through the first half when Purkis was upended by Johnston inside the box but Conor McCloskey could only smash the subsequent spot-kick over the bar.

Dungannon might have taken the lead later in the half when Johnny Tuffey was unable to deal with Kris Lowe’s cross but Michael Carvill was unable to convert the loose ball while Oisin Smyth then directed the follow-up into the arms of the Glenavon keeper.

Glenavon had the ball in the net right on the half-time whistle but Purkis’ “goal” from a McCloskey corner was ruled out following a foul on Johnston.

After the break the pair combined again but Purkis’ glancing header fell the wrong side of the upright while, on the hour, Lowe fired straight at Tuffey from outside the area with Lorcan Forde sending the ball just over not long after.

The Swifts then had arguably their best chance of the game with around a quarter-of-an-hour remaining when substitute James Convie crossed from the right for Daniel Hughes to flick on for Lowe but he could only fire over.

Lowe did have the ball in the net late on but this was ruled out for offside.

“It was a great bit of football and a good finish by Kris. I’ve watched it back and it’s tight but it’s probably the right decision. So I’ve no complaints,” said Lindsay..

“The last 10-15 minutes, when the game was stretched, with some better decision-making in the final third we could have got in a couple more times. Hopefully it’s something we can improve upon in our next game against Carrick Rangers.”

Dungannon travel to the Loughshore Hotel Arena this Saturday knowing that the home side will be desperate to break a run of three straight defeats and move off the bottom of the table.

But Lindsay will make sure his men are well motivated for the challenge ahead.

“It’ll be a difficult game. They’re a big, strong, physical side and we’ll need to match that. They’ll be looking for their first points of the season so it’ll be a battle, but again, it’s up to us to be brave on the ball, create chances, take them, and get the victory.”