Swifts boss 'not too despondent' after Inver Park defeat 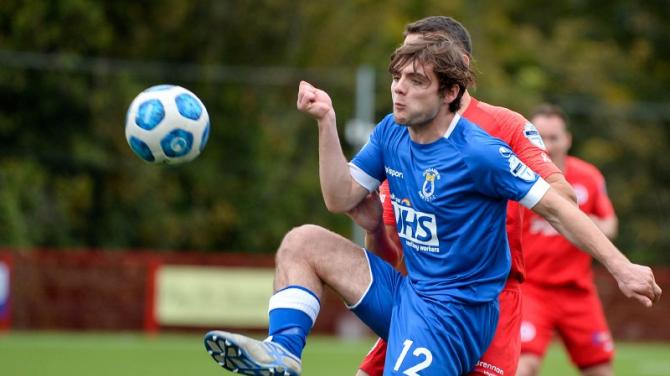 Lorcan Forde on the ball for Swifts.        PICTURE: AM Photography NI

KRIS Lindsay was looking to the positives after his side fell to a 3-0 opening day defeat to Larne.

The Dungannon Swifts boss believes his side showed plenty of potential and spark despite beginning their Danske Bank Premiership campaign with a loss on Saturday at Inver Park.

“Obviously you are always disappointed when you get beat but I think there were enough positives to take from the game,” said Lindsay.

“At times we caused Larne problems and we had a few chances of our own where, if we had been a bit more clinical, we could have got on the scoresheet.

“They scored two quick goals at the start of the first-half but I thought, looking at the performance overall, we have lots of positves to take from the game. We were away from home against a full-time outfit who are going to finish right up there this year, so we'll not be too despondent with the defeat.”

Martin Donnelly and David McDaid both struck inside the opening 15 minutes for Larne.

Summer signing Ronan Hale came off the bench to round off the scoring with a late second-half penalty after Jeff Hughes was brought down inside the box.

Donnelly's goal was a beautiful left-footed strike from just outside the area on 11 minutes.

Hale confidently dispatched his second-half penalty before having another goal ruled offside just before the final whistle.

“Larne dominated the ball and their movement was very good – you can tell that they're working on it day in, day out,” said Lindsay.

“But I thought our boys acquitted themselves quite well. There's always room for improvement. We'll anaylse it, we'll learn from it, and we move on now to a massive game against Warrenpoint."

While it wasn't the result they were hoping for, Lindsay and his players did join in the Irish League's collective sigh of relief on Saturday at a return to action following a break of 32 weeks due to coronavirus.

“It's good to get back up and running,” said Lindsay.

“Thankfully we had fans there – it was looking unlikely at one point on Friday night. Full credit to Larne and all the teams in the league, they've put in huge work behind the scenes to create a safe environment.”

And Lindsay is hoping that the rules will still permit fans to attend Irish League games this weekend.

“Dungannon and their small army of volunteers have worked extremely hard to make sure that we have the structures in place to meet the required protocols," he said.

“The club has been working with the council to ensure that fans are allowed in. Hopefully that will still be the case come Saturday. Obviously it's out of our hands. We can only do as much as we can to ensure that we are doing things right. Safety is paramount for everyone.

“It's above our heads but hopefully fans continue to be allowed in to watch the games.”

This weekend's home match against Warrenpoint Town – coincidentally the last team to visit Stangmore Park before lockdown, a 4-4 draw on March 7 – will be a “big, big game” for the Swifts, admits Lindsay.

“I've said all along, the games against the teams that are going to be around us in the league are going to be massive. It's important to pick up points – and that you win your home games.

“Even though it's only the second game of the season, it's a big, big game, and it's one that we want to ensure we get three points in.

“We know it will be difficult – Warrenpoint have signed well. They've experienced players in Fra McCaffrey, Danny Wallace, Gavin Peers and Alan O'Sulivan, but we have to meet that challenge head on.