McGinn and Dallas shine on sensational night in Sarajevo 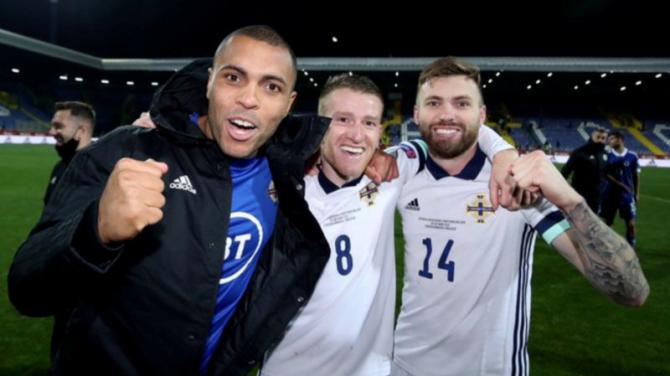 Niall McGinn and Stuart Dallas did their country – and Tyrone – proud on a sensational evening in Sarajevo.

Both men played starring roles as Northern Ireland beat Bosnia-Herzegovina 4-3 on penalties last Thursday to go through to the finals of the Euro 2020 play-offs.

The visitors won the shootout after an enthralling match in Sarajevo finished 1-1 after extra time.

Former Dungannon Swifts star McGinn wrote another amazing chapter in his international career when he equalised for Northern Ireland eight minutes into the second half after Rade Krunic had opened the scoring on 13 minutes.

Versatile Dallas produced an excellent display at right-back. The Cookstown man and ex-Coagh United player capped a superb individual performance to score his side’s first penalty in the shootout.

Northern Ireland will now play Slovakia in the play-off final in November after they defeated the Republic of Ireland on penalties in Bratislava.

McGinn dedicated the victory over Bosnia-Herzegovina to the team's supporters.

Due to Covid restrictions, no away fans were present to witness the success.

“What a night. We’ve got the support from back home, that one’s definitely for the fans,” said the Aberdeen winger.

“It’s unbelievable, what a feeling - the team spirit has been brilliant."

The Aberdeen man muscled through before delivering a cool finish to cancel out Rade Krunic’s first-half opener.

The shootout victory sets up a play-off decider against Slovakia at Windsor Park on November 12.

McGinn is a man for the big occasion and scored in Northern Ireland’s famous victory over Ukraine at Euro 2016.

“I’m delighted personally to get the goal that got us back into the game. I was there for the flick-on I slotted it in well,” said McGinn, who was a surprise starter on Thursday night.

“More importantly, we’re one step closer. Just the sheer determination of the boys, the work-rate and work ethic among the squad, the team spirit has been absolutely brilliant.

“We didn’t get off to the best of starts, but we showed character. We regrouped at half-time and started the second half very well. I got a bit of joy down the left and got a few crosses in.

“For the boys to step up to take the penalties when it mattered most was unbelievable and Bailey (Peacock-Farrell) made some great saves and has been brilliant.

“I've been training hard, working hard and fair play to the manager (Ian Baraclough) for bringing me in and selecting me. I've repaid his faith in me by scoring an important goal. I've always been renowned for scoring important goals and thankfully I've got another one.

“That’s us ready to rock in Belfast next month.”

Unfortunately, Northern Ireland were unable to replicate their Sarajevo heroics on Sunday, losing 1-0 to Austria in the Nations League in front of 600 home fans at Windsor Park. Ian Baraclough’s men are away to Norway in their next Nations League outing on Wednesday.