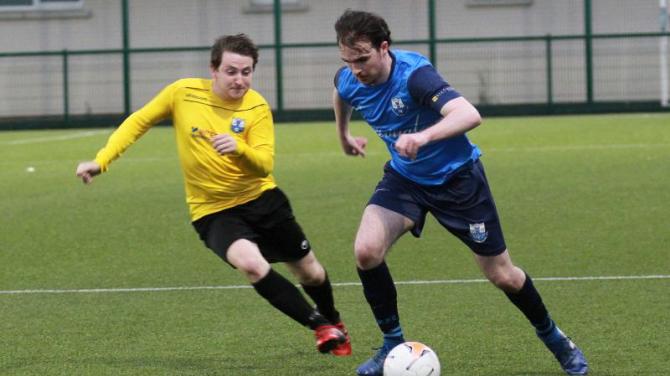 KILLYMOON Rangers were delighted to host their annual charity match with sponsor Steelweld Fabrications on Wednesday past at the Mid Ulster Sports Arena, with all proceeds going directly to the NHS.

Special thanks have been paid by all concerned to all the NHS workers for their effort and dedication through very testing times. Donations continue to come in, and the club is very thankful to all the players, staff and supporters who made donations on the evening of the match.

The match finished 3-1 to the Killymoon XI. Steelweld took an early lead through a wonder strike from midfielder Shea Murphy, who struck a free kick which caught the wind and flew straight into the roof of the net.

In the second half Killymoon pressed on, and great goals from Jamie O'Neill, Jamie Smith and new signing Jay Little secured the win.

A great friendly match, played in good spirits, for a great cause. Thanks to Steelweld and all the lads that took part.

A moment's applause was held in recognition of the sterling efforts of the NHS workers, and also in memory of the late Richard Scott - a local referee and friend of the club who sadly passed away last week.

Killymoon Rangers newly formed Reserves team got their season in the Lonsdsale League underway on Saturday past, with a home fixture against Craigavon City Reserves.

The game was due to be played at Fairhill, however, damage to the playing surface at Fairhill led to a last minute change in venue, and the game was played at the Mid Ulster Sports Arena.

Craigavon City got off to a good start, retaining the ball well, and a quick counter led to an early goal from the traveling side, making it 1-0 to Craigavon City after 20 minutes.

Killymoon quickly got back into the game and had a goal ruled out after Ryan Smith was adjudged to have fouled the Craigavon centre back as they both challenged for a header at the back post.

Killymoon continued in search of an equaliser, with shots from Stuart Donaghy, Stefan Shields, and Warren Smith all failing to find the net.

As the second half got underway, Killymoon took the greater portion of possession and began to bombard Craigavon with crosses and shots.

There were several goalline clearances, including a fantastic save following an overhead kick from Mark Montague which left everyone including the Craigavon players in disbelief as to how it stayed out.

Finally the breakthrough came, late in the game, and much deserved.

Defender Eoin Coyle found himself in the opposition box and quickly shifted the ball onto his right foot and fired high into the net from eight yards out. A great goal and finally Killymoon got themselves back to 1-1.

As the game came to a close, Killymoon threw everything at Craigavon in search of a winner, but it wasn't to be as both teams walked away with a point each.

It was an encouraging performance from Killymoon Reserves in their first league game.

Next up is a mid-week trip to newly formed local team Coalisland Bhoys over in Coalisland. A derby game of sorts, with Killymoon hoping to get their first three points of the new campaign.

First team training and friendly matches continue as per usual, as the club eagerly awaits an update from the Ballymena Provincial League regarding a concrete start date.

For now, the club has been told there will be NO league football taking place until at least the 3rd of October. For now, the first team has a schedule of exciting friendlies and tough training sessions to enjoy.

The Killymoon Rangers 50 Club, which many might have seen on Facebook, has proved a big hit locally! All 50 spots are now taken! A huge thanks has been extended to everyone who joined. To summarise, the club will have a monthly draw, all 50 names into a hat, the first name out will win a £200 first prize and the second name out will win £50 second prize.

The club is deliberately small, giving people a very high chance of winning a prize each and every month. Proceeds go to the club. The fundraising idea was devised due to it being the club's 50th anniversary season.