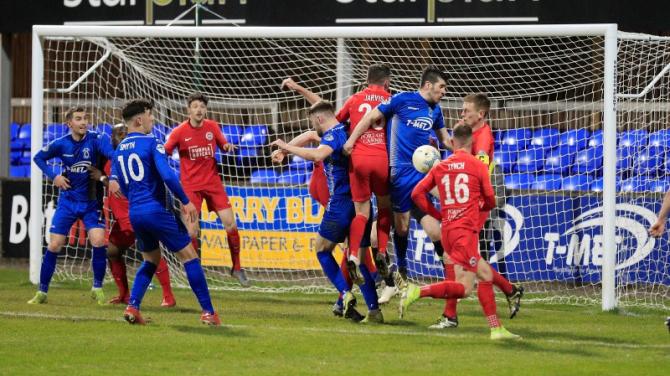 DUNGANNON Swifts suffered only their second loss since New Year's Day after losing out to in-form Larne under the lights at Stangmore Park on Friday night.

While it was always going to be an uphill task against a team who had won seven of their last eight in all competitions, the Swifts will be disappointed to finish the game empty handed after picking up points away at title challengers Cliftonville and Linfield in recent weeks.

And the Dungannon men started the brighter of the two teams, forcing the first save of the match after six minutes when Caolan McAleer’s free-kick from the right hand side.was pushed away by goalkeeper Conor Mitchell.

On eight minutes, possession was given away by Harry Flowers with Daniel Hughes profiting but Albert Watson got himself in the way of the low goal bound shot.

At the other end on 11 minutes, Tomas Cosgrove played the ball low across the face of goal from the right but David McDaid couldn’t get on the end of it.

The Swifts came close again just before the half-hour mark when Larne failed to properly deal with McAleer's corner. The ball fell to Oisin Smyth around seven yards out, but his shot was blocked by the legs of 'keeper Mitchell.

Swifts continued to push for the opener and saw two further chances go amiss. Forward Daniel Hughes went close when he chested the ball down and away from his marker, but his first-time effort went over the bar, then McAleer’s shot was tipped wide by Mitchell.

However, it was Larne who took the lead on the 35th minute as Cosgrove crossed in from the right, 'keeper Conor Byrne punched the ball into the path of Lynch, whose shot was well blocked by Dylan King, but Marty Donnelly was on hand to roll the ball into the net with a composed finish from a tight angle.

The Invermen doubled their advantage ion the 65th minute when Fuad Sule’s shot from 20-yards crept under Byrne as the rookie stopper let the ball slip through his hands and into the net.

The spirited Swifts side refused to give up but were struggling to break down the organised Larne defence.

Chances did come when Hughes controlled a cross from substitute Mark Patton but his shot looped over, before Kris Lowe just failed to get on the end of a fine cross from right-back Caolin Coyle.

Jeff Hughes sought to make it three goals in two games for Larne when his shot whistled just past the near post after Lynch had crossed in from the right.

The result leaves Swifts sitting with a game in-hand and six points above the relegation zone, after fellow strugglers Warrenpoint Town and Institute played out a 2-2 draw at Milltown.

Up next for Dungannon is an away clash against eighth placed Carrick Rangers at 3pm on Saturday. The Swifts will be hoping for better fortunes than their last meeting, when they fell to a 1-0 defeat at Taylors Avenue.