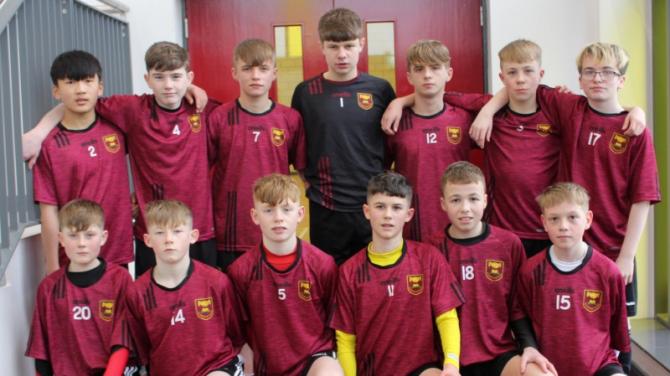 ​​​​​​THE semi-final of the Mid-Ulster Cup took place at Integrated College Dungannon with the ICD U14 Boys’ Team facing a strong team from St Patrick’s Academy, Dungannon.

Speed, pace and skill were on show from the outset and the two teams appeared equally matched in a very competitive game.

St Patrick’s Academy closed the first half with a 1-0 lead but the midfield pressing of Matthew Hughes and Elijah Weathered meant ICD could counter attack in the second half and it wasn’t long before ICD’s Zach Cowan brought the score to 1-1.

In a hard fought game, St Patrick’s were unlucky when ICD goalkeeper Reuben Kelly made an excellent save on a shot taken just outside the box.

However, with Tommy Taggert organising the back line and a solid performance from Christian Weng at right back, it wasn’t long until ICD dominated possession and Zach Cowan after some highly skilled passing in difficult conditions, sought out another opportunity on goal, pushing the ICD scoreline to 2-1.

St Patrick’s Academy remained determined and with the result still in doubt, both teams fought hard for possession.

ICD’s Sam Anderson struck a fantastic shot into the top left hand corner, with a precision finish, to leave the final score 3-1 in ICD’s favour.

The determination and desire shown, by ICD, in the second half was a great credit to the players. This is the second time in three years the ICD U14 Boys’ Football Team have progressed to the Mid-Ulster Cup final. The venue and opposition for the match are still to be confirmed.