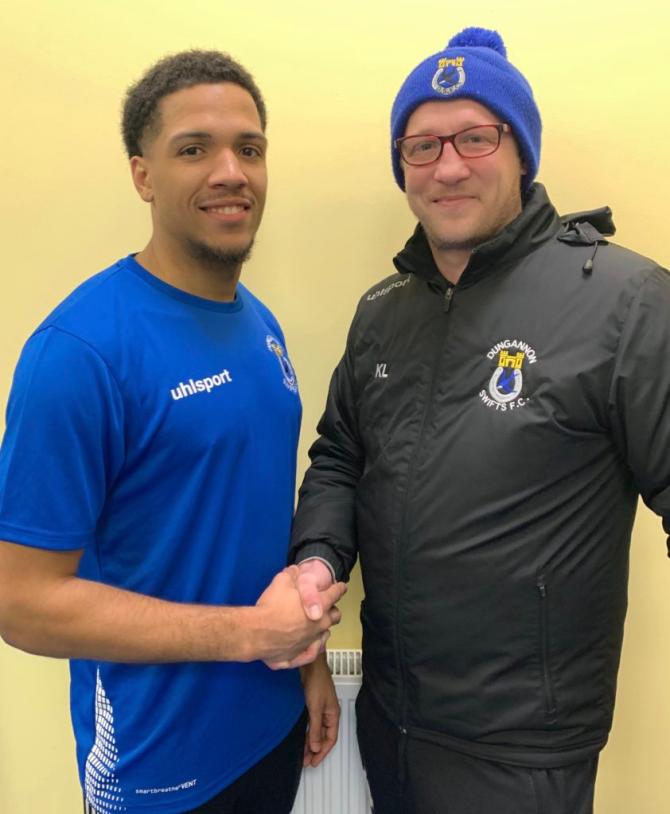 JUST hours after confirming the departure of club captain Seanan Clucas, Dungannon Swifts have confirmed the arrival of two players.

The Swifts have added forward Guillaume Keke and Francis Brennan.

Frenchman, Keke, brings with him a wealth of experience in the Irish League, having been on the books of Cliftonville, Larne, Ards and most recently Carrick Rangers.

"I am happy to have signed for Dungannon Swifts, I really like it here at the Club," said Keke.

"Obviously I know Kris from playing with him and he convinced me to come to Dungannon. I played in all the games at Carrick but I felt that my chances may become limited as they recently signed Darren Murray and I just want to play."

"I’m back and it’s honestly great to be back," said Fra. "The last time I left, it was sort of very rushed and looking back, it was probably the wrong decision on my behalf.

"I’m just delighted to get back in, and it’s good to see there are still a lot of familiar faces around the Club. Whenever I left I obviously left the Premier League and went down to Portadown for a challenge, and it was harder than I expected in the leagues.

"Any player in the country will have the ambition of playing as high up as possible. Whenever the opportunity arose to come back to Dungannon, I just felt like I couldn’t turn it down."

Speaking after both signings were confirmed, Kris Lindsay said: "“I’m delighted to get both Keke and Fra on board. They both bring a wealth of experience with them having both played in the league for a number of years.

"Obviously Fra has had an excellent start to the season with Loughgall in the championship. Now he is relishing the opportunity to step back up to the premier league.

"I've known Keke, I’ve known a long time. He’s something different in the forward area that we don’t have at this moment in time, but he’s also a quality player who has a big strong physical presence, but he can also play.

"He will give us an extra dimension going forward between now and the end of the season.”