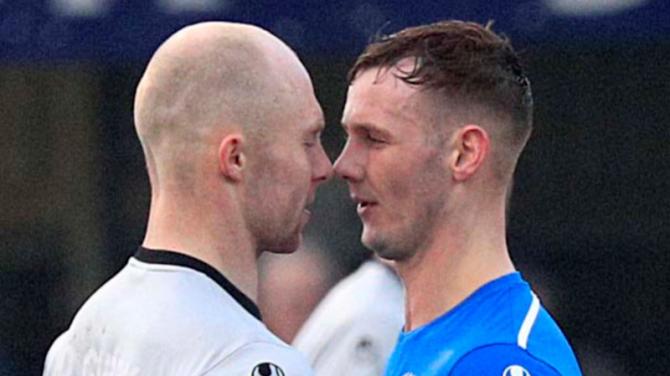 FANS were treated to a real Christmas cracker on Saturday with four goals, a red card, a storming start and late drama as Dungannon Swifts and Institute shared the spoils at Stangmore Park.

Swifts’ winger Michael Carvill was the hero as he equalised late on to rescue for a point for the ten men after Dougie Wilson was giving his marching orders six minutes earlier.

In a game dubbed as a ‘relegation six pointer’ it was vital the Tyrone men got a result. The draw means the Swifts sit 10th in Danske Bank Premiership and retain a five point advantage over the Stute as they enter the busy festive period.

The home side made two changes to their team, welcoming back goalkeeper Stuart Addis and skipper Seanan Clucas after both missed last weekend’s defeat at Ballymena United,

The game got off to a storming start and the visitors should have taken the lead after three minutes when Shaun Leppard’s right wing cross was flicked on cleverly by Gareth Brown at the near post, straight into Niall Grace’s path, but the midfielder volleyed over from close range with the goal at his mercy.

And the ‘Stute’s pressure soon paid off as a former player came back to haunt the Stangmore men for the second game in a row.

Cormac Burke opened the scoring with a super effort after eight minutes when he instinctively found the top corner with a great strike to leave Addis helpless.

The midfielder's initial left wing corner was punched clear by Addis, before Grace passed the loose ball back out to Burke, who cut inside before calmly curling the ball into the net.

Moments later, a goalkeeping error by Rory Brown nearly gifted the home side an equaliser, as he came rushing out of the penalty error but lost the ball to Ben Gallagher, but fortunately for the 'Stute keeper, the striker's chip to the unguarded net sailed wide.

The lead only lasted around 90 seconds when Douglas Wilson beat Rory Brown in impressive style with a 25-yard left-foot free-kick which nestled into the top right hand corner after Clucas was fouled by Shane McNamee.

Sean Connor's men missed a great chance to regain the lead on 22 minutes when following a quick counter attack, left-back Colm McLaughlin raced in behind the Swifts defence, but his attempted dink was well saved by the out-rushing Addis.

Institute did however go back just after the half-hour mark courtesy of Evan Tweed’s finish from the loose ball after Addis could only palm a Burke free-kick into his path.

Gallagher had a half chance to level things on 50th minute, but the young striker's snap-shot from the edge of the box, whistled wide.

Swifts suffered an injury set-back on 56 minutes as Addis seemed to pull his groin and had to be replaced by young keeper Conor Byrne.

The woodwork and some last ditch defending denied Institute scoring a third goal minutes later as Callum Byers nearly headed into his own net, but the ball came back off the crossbar and Leppard’s follow-up effort was blocked by Kris Lowe.

Dungannon were reduced to ten men going into the closing stages following Wilson's dismissal on 80th minute after clashing with substitute Brendan McLaughlin.

However, Kris Lindsay’s side dug deep to equalise with five minutes remaining thanks to Michael Carvill.

The ten men levelled things completely against the run of play as Byrne's long punt down field wasn't dealt with by Conor Tourish, the impressive Ben Gallagher found Michael Carvill on the edge of the box and the ex-Crusaders man's 20 yard snap-shot, caught out ‘Stute’s Brown and nestled in the keeper's bottom right hand corner.

Up next for the Dungannon men is a Boxing Day trip to Mournview Park to face Mid-Ulster rivals Glenavon FC.