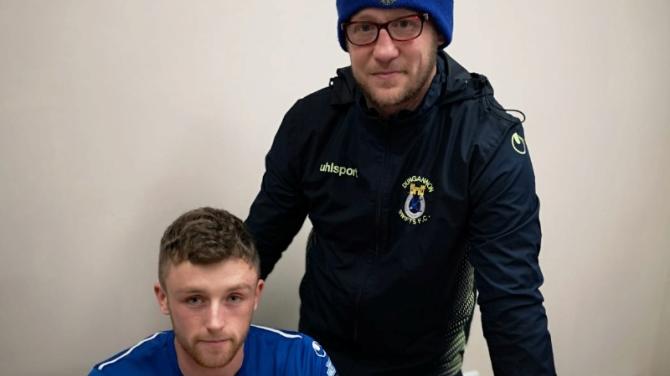 DUNGANNON Swifts’ boss Kris Lindsay hopes the return of ex-Partick Thistle, Sligo Rovers and Finn Harps winger Caolan McAleer will be the first of many signings in next month’s transfer window.

The former Dungannon United Youth player will be available for selection from January after agreeing an 18-month deal with the Stangmore Park outfit.

McAleer, who has been training with the squad for the past couple of weeks, said he hopes to bring “excitement” to the club and help them climb up the table away from the relegation zone.

“I played at Dungannon United Youth when I was younger so I know what the club is all about,” he said.

“It’s a Tyrone team, I’m from Tyrone and I’ve always kept an eye out to see how they’ve been doing.

“I am hoping that I can add excitement and hard work but also chip in with goals and assists to the team.

“Personally at a team level I want to get the club up as high as possible in the league and away from the current league position.”

The Swifts remain in 10th position after coming off a 3-2 loss to Ballymena at The Showgrounds on Saturday.

It means the Dungannon men have only picked up three out of a possible 30 points across the last 10 league games.

But Swifts’ boss Lindsay hopes to bring in a few new faces to “freshen” up the squad and help them push up the table.

And he believes McAleer, the first signing of the upcoming window, will be a “quality addition” to the team.

“I am delighted to get Caolan McAleer over the line and signed for the next 18 months,” said Lindsay.

“He is a quality addition to the squad, he will give us more options in forward areas and brings that little bit of experience to the squad that we are lacking a little bit.

“He has been playing in the League of Ireland. I am excited to get working with him and seeing what he can do, come the New Year when he can play.

Lindsay continued: “We will look to freshen the squad up in January and hopefully Caolan will be the first of a couple of signings that we can get in across the line, to try and push us on!”