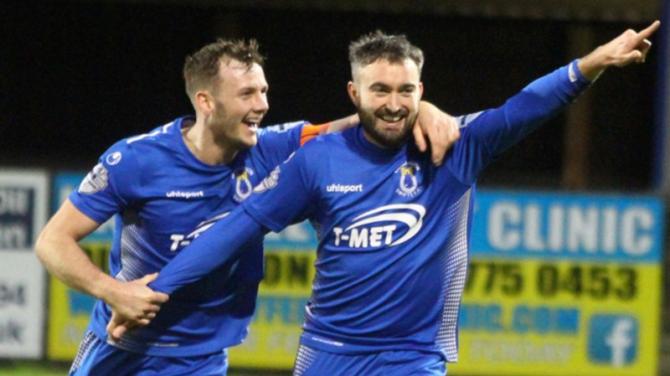 WITH just two weeks to go until the big day, Dungannon Swifts’ players have given their boss the present he desired most - a league win.

Ending a winless run that started in September, Kris Lindsay is sure to be delighted that in a game his side simply couldn’t countenance losing, they didn’t.

In fact, not just did the Swifts avoid defeat, in the second half they impressed.

Ahead of the game, Lindsay opted for experience, swapping Dylan King for Douglas Wilson and calling Terry Fitzpatrick out of retirement to slot into a holding role in midfield.

The Swifts also welcomed back 40-year-old goalkeeper Stuart Addis and captain Seanan Clucas who was previously missing through suspension.

And it took just four minutes for the rejuvenated Swifts to take the lead.

Michael Carvill whipped in a corner won by Mark Patton, Callum Byers then got to the ball ahead of his marker and headed home from close range.

Doyle’s outstretched left boot made sufficient contact with the ball to ensure it found the back of the net.

Fresh from memories of last week’s pummeling at the hands of the Crusaders, everyone connected with the Swifts could have been forgiven for thinking ‘here we go again…’ but this time, Lindsay’s side were much more resolute.

Indeed, the Swifts looked likeliest to score next.

A cross from Ross Redman caused problems for Warrenpoint, with both Clucas and Ben Gallagher waiting. They managed to clear but it came back to Kris Lowe, whose first header was deflected by a team mate but he pounced on the ball and his second effort, from six-yards, was deflected behind for a corner.

In the second-half the Swifts were once again on the front foot. A Carvill corner was volleyed over at close range from Gallagher, before a Wilson free-kick hit the wall.

Growing ever more dominant in the match the Swifts finally made the pressure pay in the 60th minute.

A pass from Carvill found Lowe, who turned the ball across the box and Patton was the most determined to get there.

He slid for the ball, along with Warrenpoint defender, Conall Young. Patton got the touch, or at least will claim he did, and the Swifts were back on top.

With the game approaching its final twenty minutes and the Swifts holding a fragile lead, nerves were to be expected. However, the perfect remedy was found as Patton scored again.

In the 73rd minute, Gallagher played the ball to Patton who fired assuredly into the bottom left corner.

As the full time whistle sounded, the roars of celebration from the Dungannon bench showed just how much the victory meant to Lindsay and his backroom team.

Speaking after the game a delighted Lindsay revealed how tough the past few weeks had been.

“The past few weeks have been extremely difficult,” he said.

“I am a young manager. It’s the first period of my career where I have gone through a run of results like this.

“Overall I am delighted with the performance and now it is a starting point for us to try and kick on and put a little run together.”