Swifts back Lindsay amid losing streak 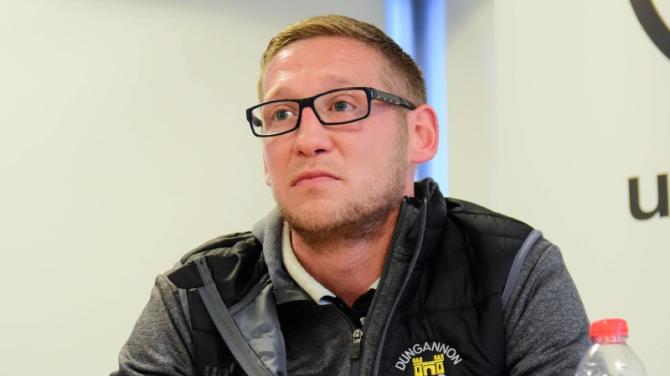 DUNGANNON Swifts Chairman Keith Boyd has given his full backing to his manager despite a torrid run of results for the club.

The Stangmore Park men have now lost eight league matches in a row and have conceded 12 goals in their past two league games, both 6-1 drubbings against Glentoran and Crusaders respectively.

In this troubling run of results, the Swifts have also shipped four on two occasions to Linfield, once in the League Cup, lost 5-0 to Cliftonville and lost 4-3 to Warrenpoint Town, who up to that point had lost every single game this season.

Dungannon now sit in 10th place, just two points above the relegation play-off spot currently occupied by Institute and five above basement battlers Warrenpoint, who have enjoyed an improvement in form under new manager Barry Gray.

And it is Warrenpoint who come to Stangmore Park this weekend in a game the Swifts will be desperate not to lose, firstly to put an end to their wretched run and secondly to stop the men from Milltown from getting any closer to them.

As is often the case when clubs suffer poor runs, attention turns to the future of the manager.

Kris Lindsay has not been immune to the pressures which such a run brings, having left The Oval last week following the thumping by Glentoran without speaking to the press.

However, the club’s Chairman has reiterated his support for the man he appointed to take over from Rodney McAree 15 months ago.

“We brought Kris in and he’s a good young manager and we are sticking by him,” Mr Boyd told the Courier.

“We went on a run at a point last year without winning but things turned round and we have faith in Kris.

“There’s a young squad there at the minute with a lot of promising young players and if we keep the team together then you don’t know where you might end up.”

Coleraine manager Oran Kearney famously went through a nine game losing streak with the Bannsiders back in late 2013, but the board stuck with him and the transformation of the club’s fortunes under the Ballymoney man has been nothing short of remarkable in the seasons since.

The Swifts will be hoping their patience will be rewarded even half as handsomely as Coleraine’s has been, and they have a good opportunity to halt their losing run this weekend as bottom side Warrenpoint come to Stangmore. Kick off this Saturday, 6 December is at 3pm.