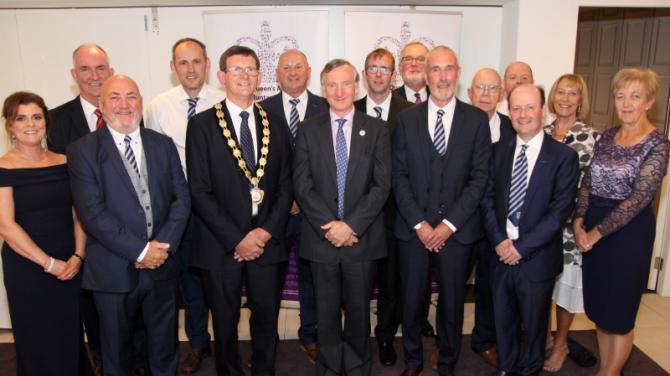 COOKSTOWN Youth Football Club were honoured and privileged to be officially presented with The Queen's Award for Voluntary Service Crystal and Citation by Her Majesty's Lord-Lieutenant Robert Scott OBE.

A lot of hard work and preparation went into achieving this prestigious award and the proud representatives of Cookstown Youth Football Club, Alan Carson and Deborah Farrell, had the privilege of collecting the award on the night from Her Majesty's Lord-Lieutenant.

This is the highest award given to local volunteer groups across the UK to recognise outstanding work done in their own communities, and is classified as an MBE.

The club would like to thank everyone that was involved on the night and helped with the preparation including the Queen’s representatives, Walter and Sheila Rader and piper Jade.

Thanks are also extended to Trevor Wilson and Andrew Johnston for their letters of support, Carol Doey who did a fantastic job as MC on the night, and of course, the interviewees Nigel Talbot, Niall Hunter, Jack Turkington and Rodney Campbell.

The club could not be where it is without the support of its sponsors Steelweld Fabrications Ltd, CeX Cookstown, Emerson Cookstown (Copelands), Aarons Gym Cookstown and SuperValu Cookstown.

The award is a result of the commitment of a fantastic group of volunteers fulfilling a wide variety of roles within the club, which enables the club to continue to grow from strength to strength.

Everyone involved in the club is a volunteer, there are no paid employees.

A special mention is also extended to Stafford Thompson, Henry Maxy McElwee, Nigel Talbot, Niall Hunter, Alan Carson and Philip McWilliams who between them have volunteered for over 130 years and, of course, their wives wives who have also supported them and the club throughout the years.