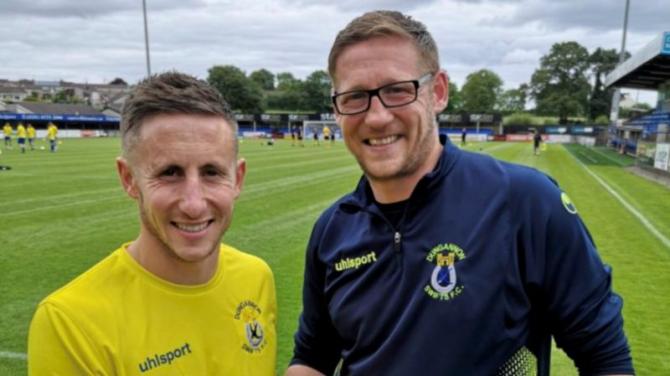 DUNGANNON Swifts have moved to bolster their forward line ahead of the new season by securing the signature of former Crusaders forward, Michael Carvill.

Michael spent the latter half of last season at Stangmore Park on a loan deal.

However, he enjoyed his time at Dungannon and impressed staff at the club so much that he has officially signed a one-year-deal as a Dungannon Swifts player for the 2019/20 season.

Carvill is an experienced Irish League player having spent seven years with Linfield FC, where he was part of three double-winning sides.

He then signed for Crusaders in June 2015, where he went on to win two senior league titles and a Country Antrim Shield.

Kris Lindsay said: “I am delighted to get Michael over the line. He is a player with lots of experience and will bring massive positives, not only on the pitch but also in the changing room.

“We obviously had Michael on loan last season, frustratingly he had a few niggling injuries that hampered him, but in the last 3/4 games of the season we got a glimpse of the quality he possesses. I am looking forward to seeing him this season.”

Speaking about the move, the exciting forward said he is eager to push on and show Swifts’ fans what he is truly capable of.

“I came down here last year and got injured early on which was a bit of a setback. But as soon as I came down and saw the club obviously I really enjoyed it,” said Michael.

“I saw the opportunity to get out and play football, something that is very, very important obviously.

“The club welcomed me with open arms during my loan deal, during which I didn’t really do exactly how I wanted to do as the injury killed me a bit. Now I am here and will get a season under my belt and really push on from there.

“There is so much going on in the league at the minute with talk about full-time, clubs doing this and that, big signings coming in, more money and involvement.

“A club like Dungannon Swifts have to accept those challenges and really look forward to it.

“There are going to be big games here and it’s going to be tough, there is no point lying about it but that is part of the challenge and at this club we have to be able to rise to those challenges.”

He also revealed how excited he is for the season ahead.

“Why not go out and try and win every game, that's the whole point of playing football at this level - to win.

“The club just has to focus on each game at a time. On our day we are capable of beating anyone so it’s very exciting for us all.”