Aaron Hughes could be set for Northern Ireland coaching role 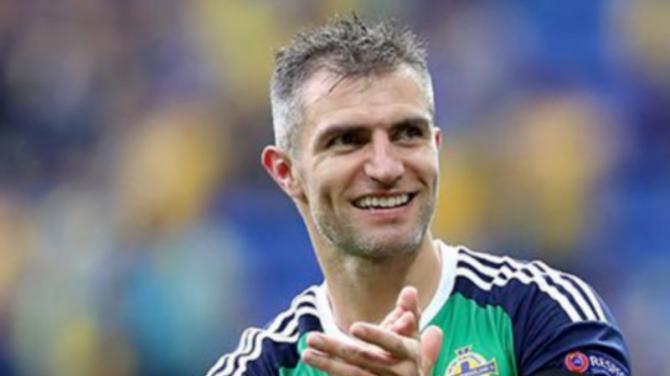 AARON Hughes’ farewell from international football may be a short-lived affair as boss Michael O’Neill considers bringing the Cookstown man onto his backroom staff.

The former Northern Ireland captain, who will turn 40 in November, brought the curtain down on his career last week after his country’s Euro 2020 qualifier win over Belarus.

He leaves the national side with 112 caps, the most of any outfield player in the country’s history and became the first outfield player to win 100 NI caps during Euro 2016.

However, he could be set for a quick return to the international fold as O’Neill leaves the door open to a potential coaching or scouting role.

Speaking after Hughes officially retired, O'Neill said: “The older players are important. Even what happens with them, be it in 12 months time, we've talked about it…they could go with the younger teams and learn from those coaches as they start to do their coaching badges.

“Its important we keep this group of players and the older ones involved. Chris Baird is scouting. Is there a way we could use Bairdy in that type of role for us? You can't create jobs for everyone, but there's ways you can improve and keep people around.”

Hughes is currently taking his ‘B’ coaching badges before moving on to his ‘A’ Licence.

Although, after two decades playing at the top level, the former Newcastle United, Aston Villa and Fulham defender is looking forward to a well earned break.

“I might just take a little holiday, just to spend some time with my kids,” admitted Hughes.

“It's strange because at this stage of the season, you are usually thinking about when I go back to pre-season and planning different things. For the first time ever, I'm going to have July and August off. The kids aren't going to be at school, so we could go on holiday with them and during that time, relax.

“Then I'll have a think about what's next, see what comes up, start planning and have a few conversations with different people about different things.

“I'm trying to get my B Licence finished now, so when I get that completed, I can move on to my A Licence.

“At least I have that in the background and am looking at other things that interest me.”

It has been reported that Hughes may be set for a hero’s send-off at Windsor Park – provided he can be persuaded to play one final game.

It is understood the Irish FA are considering offering Hughes the perfect send-off, in front of a passionate home support, during the international friendly against Luxembourg at Windsor Park on September 5.

Meanwhile, Cookstown has paid its own tribute to one of their favourite sons. A mural is currently in the process of being erected on the Millburn Park which shows Hughes alongside fellow Mid-Ulster footballers Stuart Dallas and Raymond McCoy.