Swifts swoop to reinforce at front and back 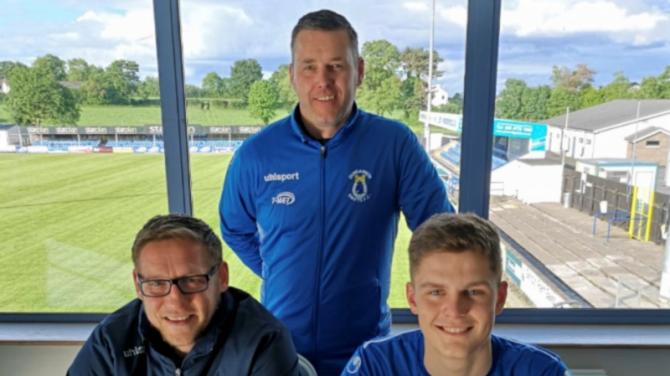 Taylor is a 19-year-old who spent two seasons at Dungannon at U14/15 level but played most of his youth football at Portadown.

At senior level, Crag has represented Loughgall FC and Annagh United. He has also played for the senior Northern Ireland men’s futsal team.

Taylor’s preferred position is left wing though he can play in any of the attacking positions, as well as left back.

“It feels great to sign for Dungannon Swifts,” said Craig. “From the time I spent at Dungannon United Youth I already know it’s a great family club and that’s something I value.

“Big Kris sold the club to me when I was talking to him a while ago.

“I’ve also known both him and Chris Wright for a long time so I know that the training is going to be top standard and exactly what to expect from them.

“Playing Futsal regularly has helped me with my first touch, close control and my awareness in tighter situations.

“Personally, I want to try and establish myself as a regular in the team and do whatever I can to help Dungannon do as best as possible.

“I will also help to ensure we finish as high as we possibly can in the league.”

Manager, Kris Lindsay is delighted to get Craig signed up, ahead of pre-season which will be commencing in just over a couple of weeks.

“Craig has come from Annagh United where he has had an excellent season. He is an attacking player with pace and a great left foot.

“Craig is one I’m looking forward to working with and giving him the opportunity to progress and show his talent in the top league.

“He is another player who is young and hungry to succeed, and one I’m excited to be working with.”

Johnston has joined the club from recently relegated Ards FC where he spent the last two season impressing between the posts.

Speaking after his signing was confirmed, Sam said: “I am really happy to sign for a club like Dungannon Swifts. It has been a long process to get my name on the piece of paper but I would just like to put on record my thanks to both Chairmen, Brian Adams (AFC) and Keith Boyd for helping to get it all sorted.

“The Swifts are a real family club and every time I have been here I have always had a good experience of people around the club.”

Speaking about the young shot-stopper, Lindsay added: “I am very happy to get him on board; he can only get better with age.

“To secure him on a three-year deal gives him plenty of stability as a player but also as a club gives us that stability in a position where we needed it.

“It’s a signing that we are looking to build the club around, young hungry players who can improve and hit the ground running. We want to mix them in with the experience that we already have here at Dungannon.

“Sam fits that build perfectly and I’m expecting big things from him.

“He is a talented, talented goalkeeper and a top person as well. Any dealings we have had with Sam have been excellent.

“I am just delighted to get the deal over the line and it is one we can start to build around. He’s at a good age where we can have the security of a three-year deal and build the team around Sam and move forward, hopefully taking that into next season.”