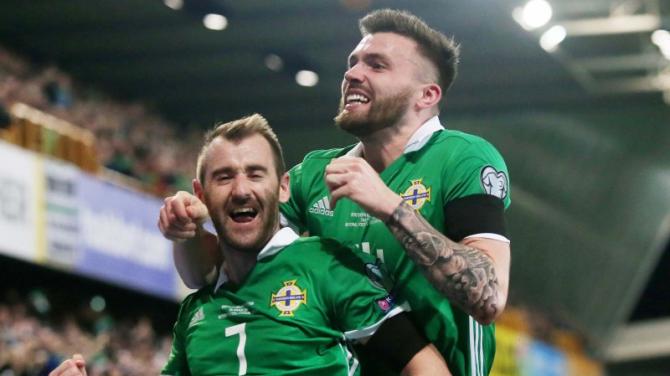 THE Mid-Ulster trio of Niall McGinn, Stuart Dallas and George Saviile played a crucial role as Northern Ireland’s Euro 2020 qualifying campaign got off to the perfect start.

Wins over Belarus and Estonia see Northern Ireland top Group C ahead of Germany and Holland.

Windsor Park was the venue for both of the Green and White Army’s games in this round of international fixtures and first up was Estonia.

Northern Ireland started the game brightly in what was an unusually subdued atmosphere and created several chances but failing to make them count.

However, in the second half, Donaghmore man Niall McGinn stepped up to show his international teammates how its done as he calmly slotted home after some good build-up play in the 55th minute.

Steven Davies controlled the ball in midfield and found Jordan Jones out wide, the impressive winger delivered a delightful ball into the box which was controlled by target man Kyle Lafferty who took it down into the path of McGinn and the onrushing Paddy McNair.

Determined to break the deadlock McGinn reacted quickest and his powerful, well placed shot found the back of the net.

With a lead to hold, tension rose inside Windsor Park, but another Mid-Ulster hero played a crucial role in securing the win.

George Saville, whose great aunt lives in the Dungannon area, was hacked down in the box and a penalty was awarded - much to the delight of the home crowd.

Steven Davis stepped up and confidently slotted home to secure the three points for Northern Ireland.

Speaking after the match, goal-scoring hero Niall McGinn dedicated his goal to the victims of the Greenvale tragedy in Cookstown.

“I was devastated when I heard the news. It was in the back of my mind to do well in the game against Estonia and score a goal and thankfully I did that,” he said.

“The little girl only lives two doors down from my sister and it is so, so sad what happened. My sister was down at the house the other day and my mum has been along as well. I saw the remains coming home and it has been a desperate time for all the families involved.

“I have spoken to a lot of people and everyone in Donaghmore is devastated, and if me doing well and scoring a goal on the international stage can bring any sort of shred of light to the local community, that is good. It was an important goal for Northern Ireland, but it was for my local community as well.”

All three men also played a crucial role in Northern Ireland’s victory over Belarus on Sunday night and manager Michael O’Neill named an unchanged side.

McGinn was once again involved in the play leading up to Northern Ireland’s first as it was his cross, flicked on by Steven Davis that found Jonny Evans in space.

Stuart Dallas was also involved in the goalmouth action as his deflection was enough to send the ball looping over Bailey Peacock-Farrell and into the back of the net for Belarusian  equaliser.

Thankfully, his blushes were spared with only five minutes remaining as Josh Magennis, brought on in place of Niall McGinn, found himself on the end of a Paddy McNair cross for the simplest of finishes to secure a vital three points.