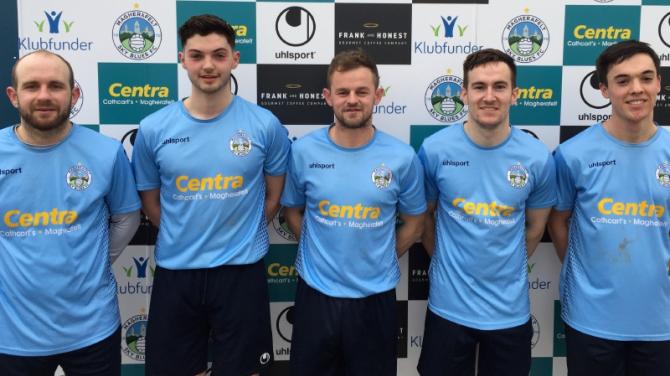 MAGHERAFELT Sky Blues welcomed Dungiven Celtic to Spires Park, for their last home league game of the season and signed off in style with a 5-3 victory, and a goal crazy first half which saw 6 goals being scored.

The Blues started off brightly and took the lead after eight minutes, when the ball fell to Raymond Wilkinson in the box and he found the back of the net.

Then from the restart on the very next attack the Blues were caught napping allowing the Dungiven striker in and finish well to make it 1-1.

The Blues then quickly restored their lead when Wilkinson was fouled in the box and the Blues were awarded a penalty, which Anthony O’Neill converted to make it 2-1 after 15 minutes.

The Blues were now in the ascendancy and soon had a third, when a brilliant Caolan Devlin freekick found the onrushing Conor McCluskey at the back post to volley home and make it 3-1 after just 26 minutes.

The goals kept coming and in the 33rd minute, Dungiven pulled a goal back to make it 3-2 after good work from their winger allowed their striker to tap home into an empty net, before goal scorer McCluskey became provider when after good work along the left wing he squared for Mark McGrogan to tap home on 44 minutes to make it 4-2 at half time.