Caulfield the star for Draperstown U13s 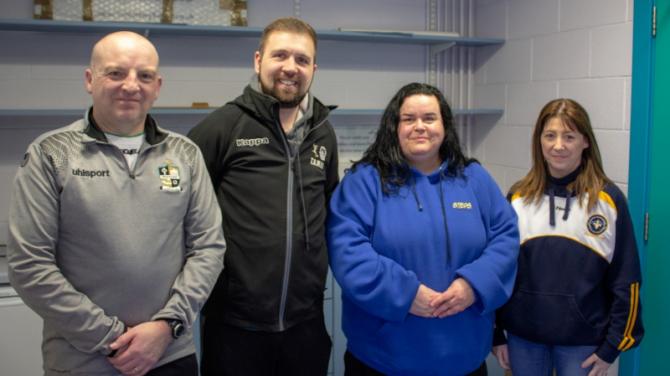 A MUCH changed U13s were the only DC team in action today. The match was very much unremarkable in the first ten minutes as a few lads played different positions and took time to settle.

On the 10th minute, the Ballymoney keeper reminded the lads of just how good he was when a fine strike from J Boyle was pushed around the post for a corner which DC proceeded to waste.

The breakthrough came on the 16th minute when a long kick from Mallon in goals was nodded in by Logan towards Boyle who ran into the box and calmly beat the keeper. 7 minutes later, the lead was doubled, when McMullan capitalised on confusion in the box to poke home from 12 yards out.

Bradley came on late in the second half and could have almost instantly got himself a goal had he been more selfish. Despite DC huffing and puffing, the half finished 2-0.

It didn't take the lads long to get going in the second half, with Caulfield, filling in at right back, roaming forward to get on the end of a great ball from McKenna to make it 3-0. McKenna himself was playing out of position at left back.

A change of formation towards the end of the second half was handled well by the lads but the match finished 3-0 despite half efforts for Heaney and McErlean to add to the scoreline.

THE club would like to thank Joe Donnelly from TAMHI who came to the Workspace Recreation Centre to deliver mental wealth training to some of Draperstown’s coaches.

We were delighted that Karen from our Mental Health partners S.T.E.P.S., Malachy from Ballinascreen Men's Shed and Michelle from 33rd Derry Ballinascreen scouts were also able to attend.

The training provided everyone with further insight into how they, as organisations in our community, can better help to enhance the mental health of our young people and deliver the message through simple games that it is ok to ask for help.

The club would like to thank all those involved with the Brackagh Quarry Wind Farm Community Fund whose valuable funding made this event possible.

Draperstown Celtic are trying something a little different.

Spotting a gap in the market for footballers unable to commit to training and weekly games they are investigating the possibility of a Draperstown Celtic Social Team and want to get everyone involved.

A friendly match has been organised for next Sunday 10th February at 1pm at the Meadowbank, against the club’ neighbours Magherafelt Sky Blues Football

Over 35 team, which will be a charitable game in aid of their chosen charity, Charis Cancer Care, a very worthy cause.

Who knows what it might mean in the future if other local teams would like to get involved but we will try and get this friendly done first.