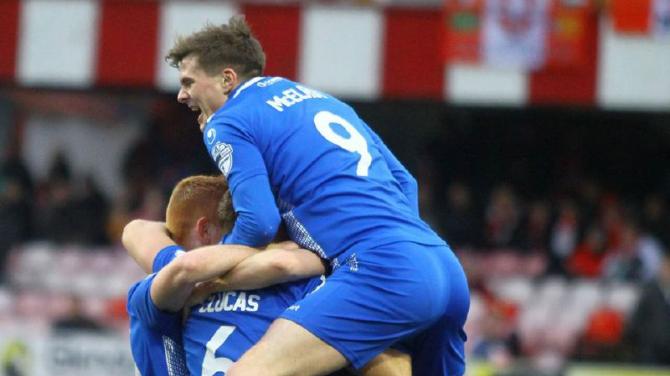 DUNGANNON Swifts continued their 2019 in ideal fashion by progressing to the sixth round of the Irish Cup after knocking out last season’s finalists Cliftonville.

Just as they had done in the League Cup back in November, Kris Lindsay’s side produced a spirited performance to upset the odds and knock out their North Belfast opponents.

While the Swifts have struggled for form in the league, they have become somewhat specialists in knockout competitions. They have already reached one semi-final already this season and it follows on from last year’s League Cup triumph.

Despite their lowly league position, the Swifts showed once again they are not prioritising the league, and look to be targetting yet another cup run after setting up a derby date at Glenavon in the next round of the Irish Cup.

Pre-match Lindsay had described this game as a free hit for his side and Dungannon had the look of a side released from the shackles of a relegation battle.

The early exchanges at Solitude brought chances at both ends. For Cliftonville Joe Gormley collected a pass but saw his left-foot snapshot saved by Alex Moore.

The Swifts went close as Paul McElroy nicked possession and crossed, with Daniel Hughes unable to get enough contact with his header.

Dungannon were the better side in the opening stages and their composure on the ball paid off on the 22nd minute when vice-captain Seanan Clucas followed up his goal at Glentoran on New Year’s Day with the game’s opener.

It followed a free-kick that was awarded when Mark Patton was needlessly pushed off the ball close to the left touchline.

Patton curled a delicious ball into the box and Clucas shook off his marker to direct his header over the reach of Cliftonville goalkeeper Richard Brush.

Gormley, the Irish League’s top scorer, was heavily involved as The Reds looked to get back into the tie.

He had a chance when Ross Lavery’s cross was headed down by Rory Donnelly, but he uncharacteristically misfired.

Gormley turned provider shortly after, cutting inside on the left, and delivering a ball into the mixer, but Caoimhin McConnell’s shot spun wide after a poor clearance by Dungannon.

There were a few scares for the Swifts in the second half and the first came on the 57th minute when Jamie Harney headed home from a Ruairi Harkin free-kick, but it was disallowed in what is best described as a tight call.

Moments later Harney and Harkin linked up once again, with the former meeting a corner at the back stick, but it came back off the post. McConnell and Gormely scrambled to get the rebound, but the Swifts defenders closed them down brilliantly.

With 15 minutes left on the clock, the Swifts were once again under the cosh. David’s Amstrong’s clearance ricocheted off Ross Lavery and spun through the arms of Moore, but captain Hegarty raced back to clear off the line.

Moore was once again called into action in the dying embers of the game, with Gormley once again trying his luck in front of goal, only to be stopped by the outstretched hand of the Swifts ‘keeper.

The Swifts had chances to wrap up the win on the break, but couldn’t make them count. McElroy teed up Hughes, but his effort was straight at Brush.

The final whistle saw angry Reds fans turn on manager Barry Gray, with chants of ‘out, out, out’ ringing around Solitude.

It was Dungannon’s first away Irish Cup win for almost four years. The last coming via a penalty shootout victory at Ballyclare in February 2015.

Swifts’ boss Kris Lindsay was full of praise for his side who made it two out of two in the New Year.

“I’m delighted with today’s performance and result,” he said.

“In the first half especially we were very good, we kept the ball well at times, created a couple of chances and got our goal.

“The second half was a different type of game. We knew Cliftonville would come out and fire everything at us, and they did.

“They had a lot of possession, but they didn’t create an awful lot.

“They had half chances, and anything they did create we dealt with and got a bit of luck with, and sometimes you need that.

“But I also thought at times in the second half, with a little more care, we could have caught them on the break. The final pass was over-hit or under-hit, or we didn’t take the chance.”

Dungannon fans will have a new lease of life after a perfect start to 2019, and the possibility of yet another cup adventure.