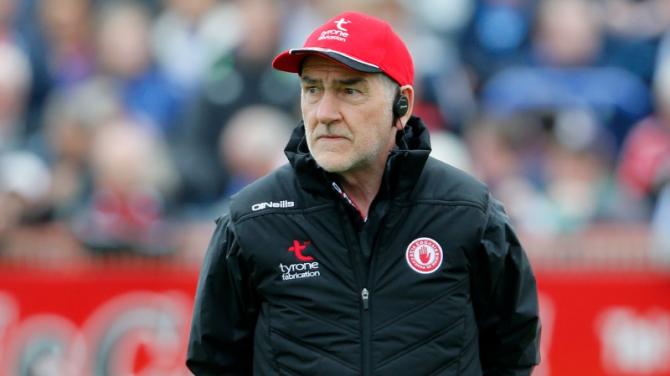 TYRONE get the new season underway with a trip to Celtic Park to take on Derry in the Dr McKenna Cup on Thursday evening.

Red Hand fans can expect to see an experimental team take the field, with manager Mickey Harte set to use the competition to have a look at some emerging talent.

But there will be a core of experience in the side that lines up against the Oak Leafers.

Harte has made it clear that he wants to be as competitive as possible in the pre-season competition, and he’s keen to win back the trophy that was relinquished to Donegal in last season’s final.

This week’s opener is a prelude to the 2019 Ulster Championship meeting of Tyrone and Derry, but is unlikely to provide many clues as to how the Anglo-Celt Cup clash of the sides may go.

Harte believes his players will not be able to fully benefit from the experience of appearing in this year’s All-Ireland final unless they get back to another decider in 2019.

Only Colm Cavanagh had previously played in a Sam Maguire Cup final, but the Tyrone manager feels he now has a squad packed full of vital know-how and understanding of the unique occasion.

“That’s our aspiration now, to get back there. If we want to use the experience of last year’s final, then you can only use it if you get back to the final,” said Harte.

“I’m not saying it won’t be of some use to us as we try to progress through the championship, but that’s a long way off, that’s looking very far ahead, but we have to have that aspiration that we set out.

“It’s good in one way and it’s more challenging in another, because that’s the standard we set for ourselves last year. We got to a final, and we didn’t do the business, so to speak.

Tyrone have reached three All-Ireland finals via the Qualifiers, winning two of them, and it’s a route well travelled that has always brought the best out of Harte’s men.

It’s never been the preferred route, but it’s one that holds no fear for the Red Hands.

“We seem to have this capacity to regroup and be a strong side in the Qualifiers.

“So either way, we’re happy to look forward to the season, knowing that it’s a step at a time.”

Harte revealed that he gathered his players around him soon after the defeat to Dublin in the All-Ireland final.

He feels it was a rewarding exercise, helping them focus on the positives and placing them in a better position to face the new season with renewed confidence.

“We had to do that, because you really can’t leave a season like that and let it sit there in limbo, so people have got to get together and reflect on what happened.

“Again it’s good to reinforce the positive aspects of the season, because when you lose in a final like that, it’s very easy to focus on the outcome of the final, and almost become some way downhearted or despondent about it.

“So we have to keep everything in context and perspective, and let people know that when all’s said and done, this was a very good season, and to be part of the last two in an All-Ireland series, to be part of an All-Ireland final, with the only person who had every experienced that before being Colm Cavanagh, as a sub.

“This is a whole bunch of new players who have now experienced an All-Ireland final day, and that has to be valuable to these players as they move into the next year of their careers.”

The Tyrone boss insisted his disappointment at losing to the Dubs was outweighed by a sense of optimism.

He saw plenty of positives in a performance that failed to halt the reigning champions’ march to a fourth successive All-Ireland title.

“I actually wasn’t too despondent about that, because I looked at it in a more pragmatic fashion than maybe some other observers did.

“Some people just saw the final outcome, and the margin at the end of the game, and that’s the story that was peddled by those who like to peddle handy stories.