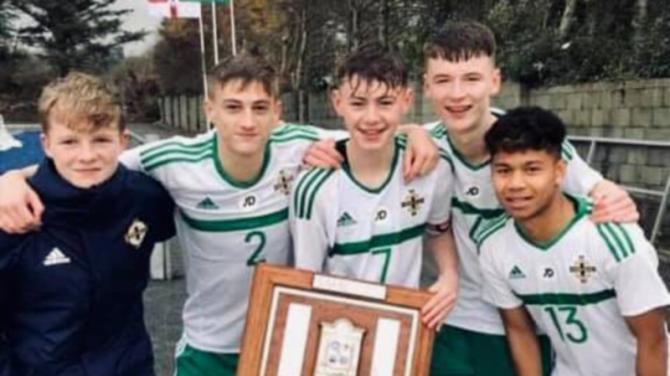 FIVE of Dungannon Swifts’ young stars have played a key role in the Northern Ireland team which has won the Victory Shield for only the second time.

Northern Ireland won the competition for the first time in 17 years after overcoming Scotland, Wales and the Republic of Ireland across the three games last week.

The competition was held in the Republic of Ireland and Northern Ireland started their campaign with a 3-1 win over the hosts and reigning champions last Monday.

On Wednesday they played out a 1-1 draw with Scotland, meaning a win in their final match on Friday afternoon against Wales would secure the Victory Shield trophy outright for Northern Ireland for only the second time in 73 years.

And they stepped up to the plate in style, seeing off the Welsh U16 side 3-1, with Dungannon Swifts starlet Vicky Saldanha getting among the goals.

Speaking to the Courier, he said: “As Chairman of Dungannon Swifts I am so proud of our club’s achievement in having five players representing Northern Ireland in this year’s Victory Shield, which they ended up winning after three fantastic performances this week.

“It’s also testament to the good work going on at our club from U16s level by our coaching staff which bodes well for the future of Dungannon Swifts.

“Hopefully now these players, along with many more, can pursue a good career in football, hopefully with Dungannon Swifts or maybe even at a higher level across the water.”