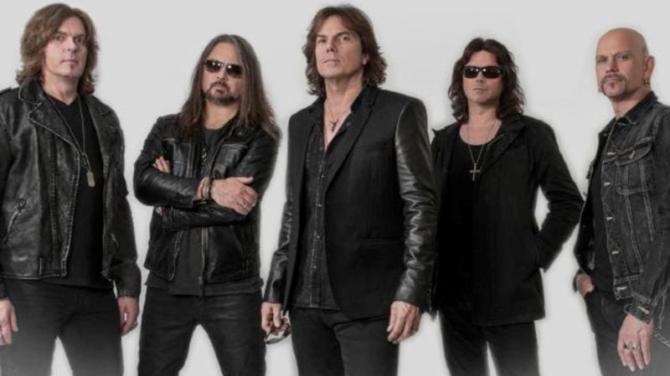 The band is currently in the middle of a massive 30-gig world tour which has seen them perform in Indonesia, Australia, Poland, France, Sweden, Finland, Spain, Germany, and Norway.

Tonight starts the UK leg with Belfast the first port of call followed by Dublin's Olympia Theatre tomorrow night, Wednesday and the band can't wait before a host of gigs across the water, including a first appearance in London's Royal Albert Hall.

When I contacted front man Joey Tempest last week, he was in an upbeat mood: “I've just had a look around the Royal Albert Hall this morning to see what the iconic venue is like and it is truly amazing.

“I'm meeting the band this afternoon for final rehearsals and can't wait to fill them in on this famous London venue.

“We play there on 23rd September (which will be recorded for audio) and it is a venue we have always dreamed of playing and now the box is about to be ticked.”

And it is not the only box ticked, as Europe kicked off their tour in May with their first ever gigs in Australia prior to their European festivals and European tour.

“We were initially due to tour Australia in 1988 but it was not confirmed and our heavy touring schedule meant it did not happen... until now.

“The Oz tour was fantastic. We changed the set around a little for the occasion and played for over two hours.”

Fans in Belfast are also in for a treat tonight with the band performing many of their huge hits including songs from their critically acclaimed album “Walk The Earth”, which was recorded at legendary Abbey Road Studios in London during the Spring of 2017.

Added Joey: “Irish shows are always special to us and our Belfast fans are among the strongest in the world, so we can't wait to get on stage at the Ulster Hall. “It is a venue which has hosted some great shows, including the legendary Rory Gallagher, so it should be a fantastic night.”

Since forming in 1979, Europe have sold over 25 million albums, toured across the world and become one of the greats of modern rock music.

The band's all conquering “The Final Countdown” album has alone sold over 15 million copies worldwide and the single of the same name was No 1 in 25 countries.

When the tour winds down in October, Joey says he and the band will take a well-earned break over Christmas and the New Year before “looking at 2019”.

“We intend to tour again in 2019 and will also be doing some writing in the build-up to recording in 2020,” revealed the Europe frontman.