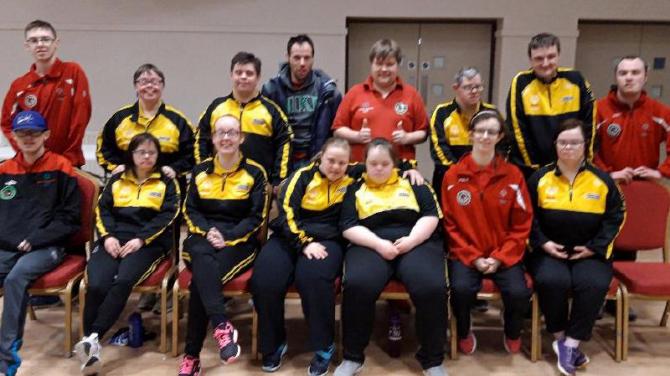 IT was a hectic week at the Eagles Club with competitive action across two of the three sports the club offers.

On Saturday our Eagles football teams made the trip to Omagh for round one of the Special Olympics Ulster football league.

The weather played havoc with the days action and there was some thoughts as to the event being postponed. The Eagles A team got off to a great start with a hard fought 1-0 win over Lisburn Together.

The lads from the B team got their very first taste of action in the league when they played Donegal Dynamos and were on the wrong end of a 2-0 loss.

Unfortunately for the B team this is going to be a very tough season as its their debut season however they did bounce back and held Strrabane to a 0-0 draw.

Getting the first point of the campaign. The Eagles A were out again next against new side Orchardville and after taking a 1-0 lead they conceded 2 second half goals to trail with 8 minutes to play.

Eagles bombarded the Orchardville goal hitting the post and bar but couldn't find an equaliser. Eagles took a bit of a hangover in the third and final game and quickly found themselves 1-0 behind against a good North West side.

As with the previous game a strong half time team talk and Eagles really rallied in the second period and only a fantastic finger tip save from O'Donnell in the North West goal denied them a share of the spoils.

Overall Eagles came away from Omagh with a mixed bag of results our A team played 3 and lost two but could easily have won all three and our B team played two and came away with a defeat and a draw which for the new charges is a fantastic day out.

Conditions were horrible and the next day out Eagles will hope to bounce back and get their league form back.

On Sunday Eagles Blue travelled to Carrickmore to face the Carmen Strollers in the final round of Special Olympics Ulster Bocce League.

Both sides had a win and a loss on their record going into the last match so it was always going to be close.

Richard Currie got the Eagles off to a good start with a win in the singles before Sammy Jo Sweeney and Jarlath Mullan pulled one back by winning the doubles.

The team game was a dead rubber as Eagles were missing a player and so had to forfeit leaving Strollers 2-1 winners on the day.

The Patrician hall is an ideal venue for the Bocce matches and all enjoyed the day out with great refreshments and all the matches played in good spirit.

Results elsewhere will determine the final league positions but both clubs deserve great credit for giving the large crowd a great days action.

This coming Tuesday, Eagles Green will conclude their league campaign with a home tie against Down Dolphins with a 6pm start. All players please attend.

This week the Eagles will have a number of members attending the Internet Safety event being held at Sperrinview School on Wednesday evening.

The club would hope to see a good turnout as this is a very important and helpful information evening.

Eagles club training will take place on Thursday as normal 7-9pm and hopefully, weather permitting the club will get back outdoors after a couple of weeks inside.

Finally a date for your diary is Friday 13th March for a bumper social evening at Quinns Corner.

There will be a fun quiz, a raffle some light bites and a oldies disco to conclude. Tickets will be available to all club members next week.