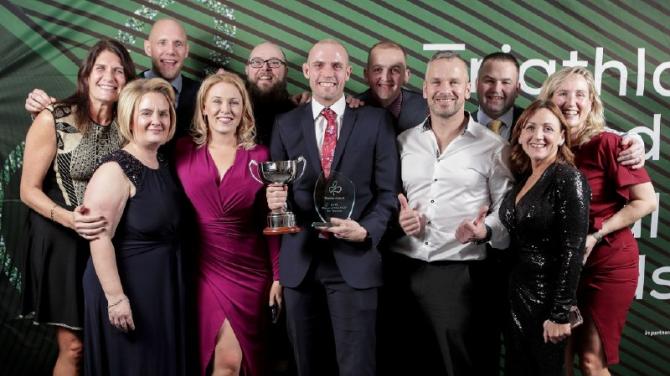 Triathlon Ireland, the sport’s governing body, held the annual event in the sumptuous surrounds of the Conrad Hotel, Dublin.

These awards are in recognition of the amazing feats of athleticism on display all season by the Ireland’s top amateur triathletes.

The Tri Tyrone 2019 Middle Distance triathlon based at Eskragh Lough, Dungannon was shortlisted as one of the top 3 races in Ireland, and on Saturday evening, the local club were ecstatic to learn that they had won

The award criteria are based on participant feedback, triathlon technical official’s reports, race success and more importantly that the race is safe and enjoyable.

Tri Limits chairman and race director Mark Farquhar told the Courier the recognition comes after a lot of hard work and dedication from everyone at the club.

“This is an amazing achievement for our club and the Mid-Ulster area. Triathlons at Eskragh Lough have been around for many years but in 2016 we become an affiliated club to Triathlon Ireland and applied to be part of the National Series,” he said.

“We never thought in 3 years that we would be winning Irish Triathlon Race of the Year.”

He continued: “Its great to be recognised for the clubs hard work in establishing our race to show case Mid-Ulster and help to bring a boost to the local economy. With over 70% of the participants coming from outside the district council area, our feedback highlighted over £50,000 was spent locally from participants in local shops, restaurants and accommodation.

“We also wish to thank the local residents and community at Eskragh, Castelcaulfield and Dungannon area, a huge thank you to Mid-Ulster District Council for grant funding, our club members for all their hard work and all our sponsors and supporters”.

There was still further recognition to come for Tri Limits, this time for a specific individual, Joanne McDonald who created Women4tri, a 12-week beginner triathlon programme encouraging women to get involved in the sport and for this, she was recognised by Triathlon Ireland as being this year’s recipient of the Caroline Kearney trophy.

An extremely heartfelt award given annually to someone who selflessly promotes triathlon to women of all ages and abilities.

Mark added: “This was a great achievement for Joanne and exactly the recognition she deserves for all her hard work, dedication and commitment to increasing female participation into sport and developing our beginners’ programmes. Huge congratulations!”

That wasn’t the end of the night for the local club, during the ceremony, and following 2019’s race success, Triathlon Ireland announced the 2020 National Championship race will now be hosted by Tri Limits @ Eskragh Lough on Saturday 25th July 2020.

Tri Limits are a new triathlon club based in the heart of Mid-Ulster. With just over 70 members from across the district, the club are made up of a broad range of abilities, with an almost even balance between male and female.

The club have in recent years focused heavily on assisting beginners into triathlon/sport, with a family friendly and relaxed setting.

The club are currently looking towards 2020 ith huge optimism for the National Championship and several beginner Triathlon programmes for both males and females.