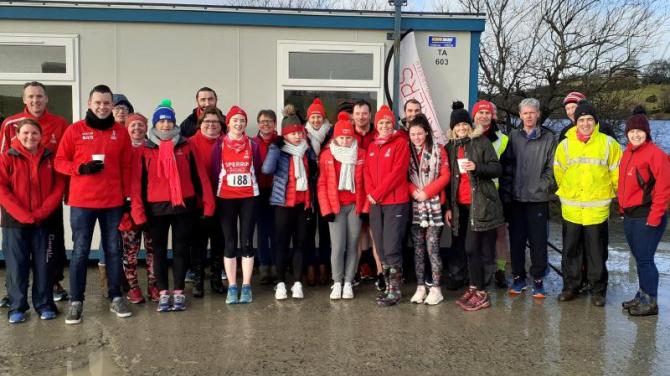 SPERRIN Harriers had a busy week, the highlight of which was the second fixture in the club’s Winter League, the Lough Fea 5k.

ON Saturday the second race of the Winter League, the Lough Fea 5k, took place in the striking foothills of the Sperrin Mountains.

While the competition heated up the opposite held true for the weather, as ice, snow and freezing temperatures tested even the hardiest of runners and made for an appropriately wintry event.

Embracing the elements, Colin Herron of Keep ‘Er Lit was first overall in a convincing time of 17.11, followed by Seamus Bradley in 17.58, with Jason Wilson of Ballymena Runners nipping at his heels to take third in 18.04.

In a closely contested battle amongst the ladies, Catherine Roberts of North Down AC took first with a time of 23.09, second was Anne Paul, City of Derry, in 23.20, shadowed by Judith Buchanan, Springwell Running Club, who crossed the line seconds later in 23.29.

The host club turned out in numbers, with Adrian Devlin making his mark as the first Harrier across the line, placing 8th overall and 5th in the Male 30 category, followed by Paul McLaughlin and Raymond Thom.

Many congratulations to Doc Martin who was 1st Male 60, and to Hannah Glasgow, Ellen Glasgow and Ellie Robinson who took all three top spots (first to third respectively) in the Female Junior 15-18 classification. Not to be outdone Carmel Fuller ended the day 5th in the Female 50 class.

Sperrin Harriers wish to thank all those who took part in the Lough Fea 5k, the runners, their supporters, and everyone involved in staging and organising the event. The club also thanks Kelly’s Pharmacy in Stewartstown for being the main sponsor.

We look forward to seeing you at the An Creagan 5M on 11th January.

Sunday saw Andrew Newell head to Spain for some winter sunshine where he took on the Malaga Marathon.

The course mostly hugged the coastline, ensuring a flat route with a gentle breeze that kept the runners cool.

Andrew completed the 26.2 miles in 2.51.38, which earned him a new personal best for the distance.

The adverse weather on Saturday morning wreaked havoc with events across the province, however the MUSA Parkrun in Cookstown defied the elements and proceeded as planned.

On Tuesday, 10th December, Sperrin Harriers were delighted to present the Motor Neurone Disease Association with a cheque for £728.

The money was raised through the club’s, Stanley Reid Memorial 5 Mile and Stunnerz ‘n Runnerz.

The race directors, Mark Reid and Tanya Quinn, along with other club members, presented MNDA with the donation.

The inaugural NI Spirit of Running Awards Gala takes place on 29th February, an event designed to celebrate all that is exceptional in the Northern Ireland running scene.

Sperrin Harriers are proud to have two members, Brian Taggart (Most Inspirational Male Coach/Leader) and Theresa O’Hare (Most Inspirational Female Runner), and a club event, the Stanley Reid Memorial 5 mile race (Best 5 Mile Event), recognised in the final shortlist. The club is delighted to be so well represented and wishes all concerned the very best of luck.

Support in this final stage can be shown by using the NI Spirit of Running Awards online voting system.

On Sunday morning Harriers joined a variety of other hardy souls to attend an organised practice run of the Greencastle 5 mile road race.

Snow and ice once again featured heavily, however the challenging conditions and course provided all involved with some valuable training.

The Greencastle 5 Miler is to be held, as always, on Boxing Day, and if past events are anything to go by participants will be treated to a fantastic festive race.