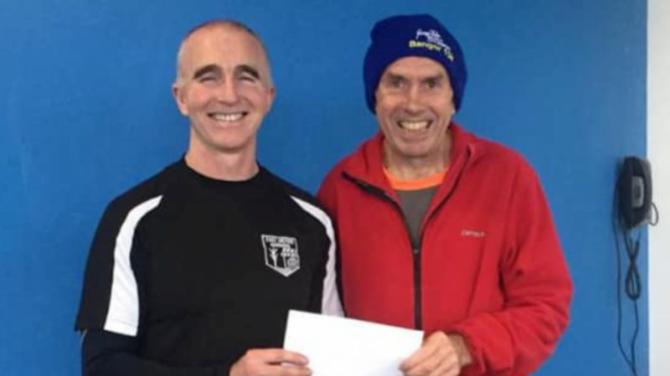 IT was another exciting weekend of racing for Termoneeny Running Club members globetrotting again to participate in events from Parkruns to a World Major marathon.

There was no let up this weekend for Tommy Hughes this weekend after his record breaking weekend last week. Tommy took part in Saturday’s The 85th McConnell Shield XC in at Six Mile Water Park, Ballyclare winning his age group with a time of 29.53.

Gary O'Doherty travelled to New York with his wife Anne at the weekend to compete in his fourth Masters Marathon (3rd this year).

Conditions were perfect on Sunday morning. Gary kept an impressive steady pace throughout the course, averaging a 6.31 minute mile around the five boroughs of New York.

Runners were supported by over one million spectators along the route. Well done Gary, that’s another Masters ticked off the list!

It was a beautiful morning on Sunday for this popular race around Hollywood Exchange.

This is a completely flat 10K and the 11 runners who took park put in very impressive performances.

MUSA: Tommy Hughes has had another great weekend! This was the warm up before winning his age category at The 85th McConnell Shield later in the day. First place at MUSA parkrun, Cookstown! This was a Parkrun pb for Tommy.

Congratulations also to Pauline McWilliams who finished  in a super time of 33:56! This was Pauline's 44th Parkrun and her 28th MUSA Parkrun.

Omagh: Andy Campbell was out again on Saturday after his first marathon last weekend in Dublin.

This time participating in Omagh Parkrun. Andy finished in a fantastic time of 34:08. This was Andy's seventh Parkrun, all of them in his home town of Omagh. Well done Andy keep up the good work!

Ecos: Also Parkrunning on Saturday was Thomas Doherty who finished Park Run Ecos in an impressive 19:10, finishing in fifth place. This is the seventh time Thomas has participated at Ecos, and his 37th run in total.