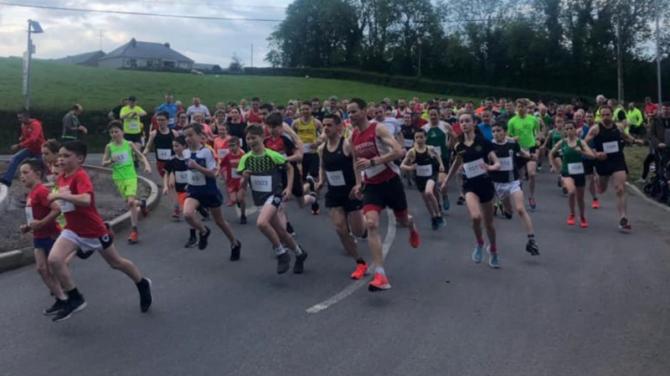 OVER 300 runners and walkers descended on Eskra on Friday evening for the first race in the Paul Murray 5k Grand Prix Series.

There was a fantastic atmosphere for the highly anticipated return of the 5k Race Series after last year’s event.

Weather was perfect for the runners with dry and calm conditions who took on the challenging undulating 5k route round the country roads.

Vincent McAlister (Acorns AC) stormed home in an excellent time of 16.17, next home in second place was Brian Taggart (Sperrin Harriers) in a time of 16.36, closely followed in third place by local athlete Adrian Scullion (Knockmany Running Club) in a time of 16.44.

The first female over the line was in form athlete Aisling Murray (Carmen Runners) in a very fast time of 18.52 followed by local athlete Grainne O’Hagan (Knockmany Running Club) in a time of 19.02.

Completing the podium in third place was Eimear McCarroll in a time of 19.15.

There were also excellent performances from Caolan Donnelly and Cadhla McCarroll who won the Under 18 Categories. Winners of Under 12 Categories were Sean Hagan and Eden Davis.

The Grand Prix winners will be determined by the athlete setting the fastest cumulative time over 3 races.

The organisers, Knockmany Running Club, were delighted with the large turnout of participants from near and far and thank everyone for supporting the first race.

The organisers would like to thank all who contributed to the success of the first race and would like to remind everyone that the series continues at 7.30pm over the next three Friday’s 14th June, 21st June and 28th June all on different 5k routes.

Registration is from 6-7.15pm in Eskra Community Centre. Entry Fee for individual race is £7 with refreshments served afterwards.