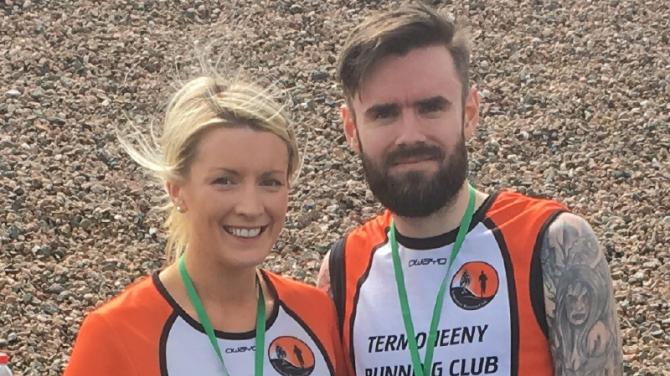 TERMONNEENY Running Club bid farewell to a very successful May with a multitude of achievements obtained by club members.

June promises to be no different because it has already begun with prize-winning performances at the Cairedeas Eoghain 5k and personal bests being recorded at the Walled City Marathon.

The 7th O’Neill’s Walled City Marathon took place on Sunday morning and over 800 athletes assembled at the Everglades Hotel to participate in this popular event. It is a challenging route which traverses through different city neighbourhoods, old rural villages, along the banks of the River Foyle and the city’s famous bridges before returning to the Walled City to finish in the historic Guildhall Square.

Niall Higgins was an official 3 hour pacer for the marathon and he carried his role out with precision because he finished in 2:59:02. Declan Leung and Damian O’Boyle acquired fantastic new personal bests with results of 3:30:21 and 3:47:47 respectively. Christian Fortes O’Neill completed his 58th marathon and this was his 5th marathon/ultra-marathon in just 48 days.

Christian had another superb performance and his result was 3:44:19. Kevin Darragh also had a terrific race and crossed the finish line in 3:50:50. Kerry Archibald completed the Extreme North Rocks N Rollin Marathon just two weeks ago and was back on form again to complete the Walled City Marathon in a brilliant time of 4:51:36. Well done to all TRC members for displaying such determination and inspirational running.

Daniel Pearson was on top form and finished third overall, just behind Sperrin Harriers’ Connor Martin and Paul McLaughlin. Claire Hassan picked up the prize for third female. It was a very enjoyable event with excellent hospitality.

MUSA: Catherine Paul recorded a parkrun personal best at MUSA Parkrun with a fantastic time of 26:25.

Limavady: Michelle Comer has achieved yet another 5k personal best and broke the 24 minute barrier with a super result of 23:54. Well done Michelle.