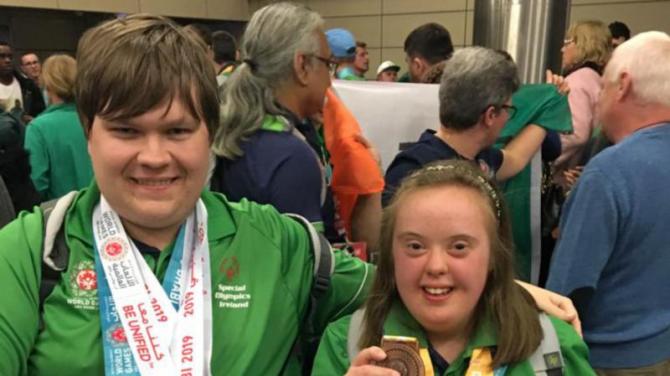 IT WAS very much a week of celebrations at the Eagles Special Olympics Club as news filtered through from Abu Dhabi and Dubai of the success of the club’s Team Ireland athletes Shannon Nixon and Richard Currie.

Richard started the ball rolling in bocce teams event with a Captains role leading the team to a Gold medal finish. Shannon had already been performing in the heat in the United Arab Emirates in divisioning for two days previous and had ran and thrown herself into two tough finals.

Richard was back out in the singles event and again defied the odds to complete a double of Gold medals in an amazing run of results for the young man.

Back at the track, Shannon lined up in a very tough final and put in the performance of her life with a PB 7:06 to take a bronze medal. It was a fantastic performance and right when it was required.

It didn't stop there as Shannon was unlucky to be just outside the medals in her softball final with a fourth place finish and Ricky rounded off the games from an Eagles perspective with a silver medal second place finish in the bocce doubles.

It was a phenomenal games for the athletes Shannon and Ricky, a fantastic result for their families and testimony to the hard work and dedication of all at the Eagles Club.

Martin Nixon, Shannon’s dad, summed it up when he said: "This isn't just a medal for the athlete but a medal for all the Eagles Club" he said "It was a life changing experience.”

Club Head Coach Paul Sweeney said: "These athletes have performed on the biggest stage and have set the bar for each and every athlete across all the sports at the Eagles club.

"We are so proud of them and their achievements and must also applaud the hard work and encouragement of parents and families alike for their contribution to the athlete success."

Club Chairman Danny O Hagan said: "Its a proud day for the Eagles, the athletes are fantastic, they are heroes."

The Eagles club continued to train amid all the great news coming from Abu Dhabi and had good sessions on both Tuesday and Thursday nights but this week belongs to Shannon Nixon and Richard Currie, Eagles legends and history makers.

The Eagles club now boasts three World Games athletes and medallists and these are a shining example to all the club’s athletes that if you work hard and do well then there is no reason why, with a little luck along the way, it could be you next time in Berlin, Germany in 2023.

The club will host a homecoming party for the champions in the coming weeks.

In the meantime, training continues with bocce on Tuesday night in Donaghmore at 6:30pm and football and athletics in the Fianna 4G on Thursday at 7pm.